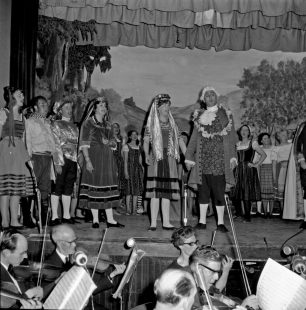 Late 1952 or early 1953, Ron Staniford approached some people to see if they would support the Council if it called an open meeting for persons interested in forming an operatic society in Bletchley. That meeting in March 1953 was followed by an inaugural meeting of the society in July when the first officers were elected.

Songs and opera extracts were performed in the local Coronation celebrations and the first production, LilacTime, followed in May 1954. Significant names from those early days include Donald Watt, Ray Holdom, Ruth Bowden, Brenda Richardson and Ron Waite. The society relied heavily on Bletchco Players at that time, whose members helped with training principals in stage craft as well as taking part themselves.

At least one production followed every year since – usually one musical show in May and a pantomime in the festive season. South Pacific, Carousel, My Fair Lady and The Sound Of Music were among those receiving extensive reviews in the local press. In 1971 the society changed its name from ‘Bletchley’ to ‘Milton Keynes’ and embraced the fledgling city, continuing to entertain local audiences and develop performing talent to the present day.