Growing up in Bletchley

Memories of a Railway Signalman's son 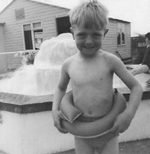 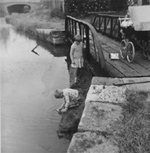 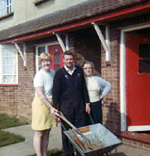 Spencer Street in the snow

My dad was offered the job of signalman in the Bletchley area, so we moved into the railway houses just by Bletchley station called Railway Terrace. They were close to the railway and I still recall the Expresses at night with their fireboxes glowing red and the way the houses would shake. We stayed there for several years and I have lots and lots of memories of the area and of this time.

This was a time when, as a kid, you could wander for miles and miles. There was always something to do with two big lakes nearby (the ‘New Found Out’ and the ‘Blue Lagoon’) and streams going to and fro – you could lose yourself for hours. We also had the open air swimming pool by the ‘Central Gardens’, with tennis courts and putting greens, plus the market and cattle market. Also, of course, there was what we called the flea pit – the old ‘Studio cinema’. We would go and look at the photos in the displays outside to see what thrills were to be showing next week. We used to go there every Saturday morning and every Saturday, the manager would have to stop the film and tell us all to calm down. The old cinema has been knocked down now. It’s funny – it’s not until something’s gone that you realise how much you miss it.

I remember when they opened ‘Queensway’, the ribbon to be cut was just to the left of ‘The Terrace’. The Mayor, the local paper photographers and all the dignitaries were there waiting for the ribbon to be cut and a grand parade throughout ‘Queensway’. That was until me and Steven Dyre (from next door) rode out of our street and down the new road on our bikes, much to the amusement of all attending…we even got our photo in the Bletchley Gazette!

I never thought we would ever move out of Railway Terrace, but things were afoot, way beyond our control. The powers that be wanted to sell off the land we lived on to build. So we all had to be moved out and we ended up at Fenny Stratford and Pinewood Drive. The house itself wasn’t too bad – probably built in the fifties with a big garden, which was great for my dad – he was a brilliant gardener. He also had 10 pole of allotment by the canal, and we always had fresh veg. with no additives or chemicals – something which I totally took for granted at the time. If there wasn’t too much in the pantry, my mum could make a meal out of nothing, or so it seemed to me.

The great thing for me was the area. It was situated right by the canal, with ‘Manor Fields’, the river, and loads of countryside. Just right for my motorbikes. I was now a teenager, and required slightly more demanding fun. There were five or six other lads, all my age, one of which became a really good mate. So with these newly found pals, this took care of the fun side of things and we got up to all sorts of mischief, usually down the river or canal or wherever. For some reason or other, my folks decided this house wasn’t right for us, so we did an exchange with a family from ‘Manor Road’ (still in Fenny Stratford). This was a very important place for me because it was here that I turned from a lad into a young man. I was really into motorbikes now, and I would often be seen wheeling these down to what we called the ‘Manor.’ This was the wasteland by Manor Fields and it was perfect for motorbikes.

Working on the railway

I was now working on the railway which sort of becomes a way of life because of the odd hours and especially the lads that you work with. I worked as, what they called, a second man which used to be a fireman in the days of steam. In fact all the drivers then were old steam men and had lots of stories of “the old days”. You were always at work, but it seemed like you had a lot of time off – this was because I was up and about when I should have been sleeping. You could work all hours on the railway. We had a rota of 11 weeks – you started at week 1 and worked through to 11 and started at week 1 again. You would have two days off. Sunday (which you could ask to work on) and a day in lieu (which we called Spiv Day) which you could end up having at any time.

An extract from the My Memories website – a collection of stories and memories written by a group of learners on a Living Archive creative IT course.