I was born in Osborne Street in Bletchley. We was an old railway family I think, me Dad worked on the railway he was a driver. My brother, older brother and he worked on the railway for quite a few years and I had a sister. It goes back a long way there’s one of my relations who drove the first train out of the Oxford LMS station when it first opened in eighteen something. I don’t know all the full details, I’ve got nobody to ask now.

I left school at fourteen. I was fourteen when the war broke out so my last three months at school we weren’t even in a class, the evacuees had come and see they were busy with them. I started work at Beacon Brush Works, that was 27th December 1939, the day after Boxing Day. We went back to school I think from the August holidays in early September and the war just started and all the evacuees were coming in, I think there were three of us they didn’t know whether we could leave or not. So we just went and done various jobs, we never had a class, we weren’t even on a register anywhere.

I went up and applied to the railway, normal way as they do you know and… I don’t know, you had just a little short interview I expect and I don’t exactly remember all of it now but you had to go and have a medical and if you was alright you was on, that was it.

What you had at Bletchley, you had the railway. You had three brush works. Well in them days a job on the railway was looked on as a job for life providing your health kept up. I expect that was always a gamble I mean a lot of chaps had to finish early through ill health and that kind of thing.

They did take some on at fifteen because funny enough I did go for a job when I was about fifteen and I was told to come back a bit later. And then an evacuee who lived next door to me was evacuated and then stayed next door in Western Road he went up and he got on. He didn’t finish up, he left Bletchley after the war he went back to London you know and I didn’t see him for years and years and then I come up against him one day and he was a driver, he was doing the same as I was. 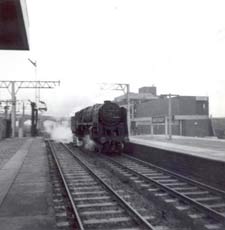 My first job was a Bar Boy. Cleaning fireboxes out. See, when the engines were in for exam all the fireboxes had to be… the fire was knocked out of them and then they all had to be cleaned out, the brick arch inside and all the stays, the boiler stays, hundreds of them. They all had to be brushed down and all the bits of clinker that had formed on them knocked off, that kind of thing. Ready for the workmen to go in, the boiler inspectors, you know and then two plate in there you had to clean that up. You’d go through the firebox, through the firebox door.

You had a flare lamp that’s what you had. That was a lamp with just a wick in and some oil in it and that burnt, smoked and all you know but then again there were plenty of space for the smoke to escape. We just had ordinary clothes in them days. I mean today you’d have been equipped with masks and goodness knows what else, you didn’t have anything only ordinary clothes. When we come out you were smothered in dust and dirt.

It was hot in there and you’d be in there perhaps it would be a couple of hours work in there. I mean you could come out and have a drink or something like that and go back in again, you’d perhaps have to. You weren’t given an amount of time, nothing like that in those days. That kind of thing hadn’t come into being then. You’d perhaps do two a night or three. It was mostly done on the night shift you did do them on the days sometimes, it depends when they came in because how things got in those days engines were out for a long while, they got behind and everything.

I wanted to be a driver, you see in those days you were on the railway years before you became a driver, not like today you’re took on and trained as drivers straight away really.

So you move, you become a cleaner, well what’s classified as a cleaner and you move to become a passed fireman? A Passed Cleaner who could act as a fireman. I was about seventeen. You had to sort of pick it up, you was on the shed, you’d put a bit of coal on and that, you’d learn how to use the shovel and that kind of thing you know, you just picked it up as you went along. So that’s as far as I can remember how we done it.

The driver would tell you to get the fire on. He could do that and learn you that way say that yes. You’d got some decent drivers and some weren’t very pleased at having you to start with but it just all just depends how you made out.

During the war they had a train run from Bedford to Bletchley in the mornings, they called it the Whitehall because they mostly from the park but they were billeted out all the way down branch line. The Whitehall. That was the name they give it. You had four or five coaches that come up. I think it was about the eight ten from Bedford something like that in the morning to Bletchley and it went back, I don’t know what time of night, about six o’clock time to Bedford. Because they were people from all over the country really that worked there, they were all billeted out all the way down to places that were at Bedford.

I was made a driver in 1958, I was passed a driver in 1955, August 1955. It was twelve months before I had my first driving turn I did move to Watford to get a driving position in 1958. I was up there just short of three years and then back to Bletchley and that’s where I was all my time, you know. I was about fourteen years from when I actually started, 1941 to 1955 from when I started on the railway till I was passed a driver. It didn’t seem too bad in them days. You think back about it, I mean I can remember my Dad I think he was about fifty-five years old when he was actually made a driver.

The last year I was at work, 1990 I got to drive The Royal Train. I think if you’ve ever had any trouble with signals or anything like that you’re never given it but I was about senior man then, I must have been close to finishing, that was a night job. Well I knew the Queen and Duke were on it they were on it and yes the one in charge of the train who was operating manager at the time. I see one of her senior ones come down get a cup of tea and that. Tells you roughly what will be going on what time and to be a little bit careful, not to rock the train too much but that’s it. Not too fast. I only done it the once.