A pupil's report from The Grammar School, Bletchley 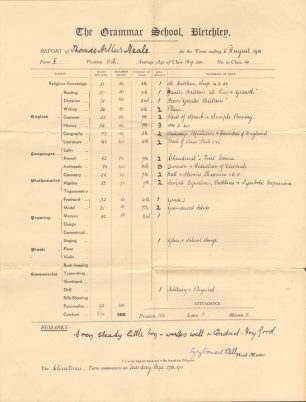 Thomas Arthur Neale was born in 1906 in Wavendon. During and after the First World War he attended Bletchley Grammar School. One of his constant memories was of how the mid-day meal was changed to just soup to help the War Effort. However, even after the War, they kept on just having soup.

The girls were educated separately from the boys and if one came into the classroom all the boys had to stand up.

The Grammar School in Bletchley was in the building now known as the Conservative Club on Queensway. The school was subsequently moved to Elmer’s near St Mary’s Church. Grammar Schools were officially created in the 1944 Education Act.