Chris and Clare:What a Pair - Dawn

I want to promote my story “Chris and Clare – What a Pair”.  I launched the book in January 2014 at Netherfield Chapel  Christopher and Clare are our children who both have the condition known as Autism – I say children but they are now adults of 39 and 34 respectively who have lived in Milton Keynes along with us parents William and Dawn.  We have been here in Eaglestone and Passmore for almost 40 years and came here in order for my husband to take employment at the Skill centre at Bleak Hall and the arrangement was Milton Keynes Development Corporation would allocate a council house to all employees if they had employment in the new town.

Christopher was just over a year old on our arrival, having been born whilst William was employed by an irrigation company named Wright Rain of Ringwood, Hampshire, on a 3 year contract.  We came here in August 1976 and after being at the Skill centre for about 18 months William took employment with an engineering company who by this time were engaged on the production of the largest shopping centre in Europe at that time.

William was interested in the new building which was taking shape and after he completed employment regarding construction he applied for the post of Maintenance Manager at the Shopping Centre.  As the Shopping centre was the largest of its kind in the country at the time, a number of special events took place such as a table tennis championship, a recording of Songs of Praise and a number of sports personalities visited to promote Formula 1 along with the sports cars. There were also a number of concerts performed by well-known artists in the country and western genre as well as religious services at certain times.

Milton Keynes, because of it’s being a new town received a number of titled visitors including Queen Elizabeth II along with Prince Philip who visited the Shopping Centre and Prime Minister Margaret Thatcher visited Middleton Hall and there is a stone commemorating the event.

William and I cherished the opportunity of moving to Milton Keynes after having spent the previous 3 years in Nicaragua as it meant we could establish some roots.  Christopher had been born on 19th December 1975 so when we arrived here, although his milestones were very delayed for his age of 14 months he was at least able to manoeuvre himself around the house in a baby walker.  I then followed this up with walking him around the Eaglestone estate by pushing his feet forward in a walking manner.  His balance was very poor even though he wore reigns whilst outside.  His feeding pattern since birth was difficult because of an absence of a sucking reflex and for the first 6 months of life he existed with the milk I was able to convey via a large-holed teat.  At 6 months he suddenly started sucking about 6 ozs. of milk but within 4 days became quite bloated which we later attributed to the condition known as Coeliac.

Christopher’s health gave us call for concern and when we were settled I discussed this with the family doc tor that referred us to Great Ormond Street hospital for a consultation resulting in his requiring two kidney operations thereby improving the boy’s life considerably.  Whilst William was at work I would take Christopher along the Grand Union Canal either in his buggy or on a child’s seat on my bicycle.

We then concentrated on the boy’s education because disabled children were offered placement in a Special school so after being tested by the authorities Christopher was offered a place at Queens School in Whalley Drive, Bletchley where he remained until the age of 19.  When we had been in Eaglestone for a while the thought of having another child entered our thinking and so Clare was born in Northampton.  Of course the thought of having another child similar to our firstborn had not really concerned us.  However on 15th September 1979 our daughter joined the family after the hospital registrar mentioned the word ‘handicapped’ on our departure from the Special Care baby ward as unfortunately Clare couldn’t suck either.  This situation lasted for 3 months and her milestones were delayed also but not as pronounced as her brother’s.

So we now had the two of them who were similar and of course we lived far from any of our near relatives as William came from Glasgow and I from Cornwall.  However we were lucky in that I met a lady called Jean Allen, originally from Lowestoft, and Pat Sweeting , originally from London, who had settled here with their families.  Pat and I met through the school and the Toy Library which was based at another special school named after a prominent citizen called Oliver Wells who lost his legs in a railway accident at the age of 26 but went on to become a businessman, to work as a clerk for the local Co-operative Society, a member of the National Union of Railwaymen and a long-standing member of the Bletchley Urban District Council before his end at the age of 92 in 1966. 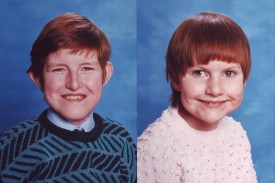 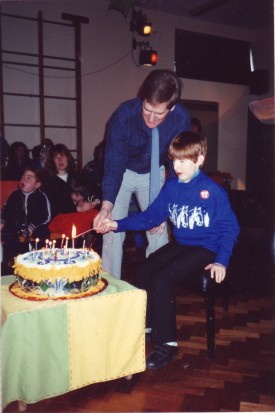 With our children being at a special school I became aware that a computer might assist them in their studies and I heard of the name of Roger Jefcoate, a Swanbourne resident, who had access to such a facility.  I met this gentleman who agreed to base a BBC computer at Queens’s school providing that we could set up an ACTIVE group and use this technology, which was what happened.

In the course of time we provided a number of computers to the school and to individual, disabled adults for use in their homes as everyone found this format encouraging with regard to the use of special needs software.  We then set up a group based in Scope at Neath Hill to develop software which we named Fingers and Toes.

Returning to our family we endeavored to educate them and to give them life-experiences which they could appreciate as by this time Clare had joined her brother at Queens School.  They managed to learn to read and write, they were both late speakers – Christopher was at least 7 before he began to form simple words and Clare was 5.  However the schoolteachers did sterling work in teaching them to swim, taking them horse-riding and on various holidays as well as ensuring they learnt basic education.

Christopher suffered chest infections until he reached a certain age when they ceased but his major problem came when he was 13 years of age when during a power cut one evening I placed a night –light in a container on top of the television.  It would appear that on looking at a clock alongside Christopher caught his jumper alight.  I was in the kitchen preparing the evening meal with Clare alongside, when our son came towards me saying “Mum I’m on fire”.  I managed to clap the flames out with my hands but I couldn’t see the extent of the burn because of the darkness.  However , by this time the hospital had been built so I took the children in the car to the Accident and Emergency Dept., as by this time our hospital had been built.  We were soon on our way to the Burns Dept. at Stoke Mandeville hospital where Christopher had skin grafts to the front of his neck followed by an infection which proved very difficult to treat, however the doctors succeeded in being able to release Christopher to our care after he spent a month in the hospital. 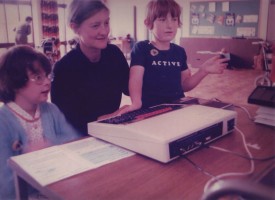 Obviously with disabled children we required the services of a number of doctors over the years and these included geneticists, an endocrinologist and of course the general practitioner.  We were given one or two different diagnoses but in the end after a number of years it was said that both Christopher and Clare have Autism. 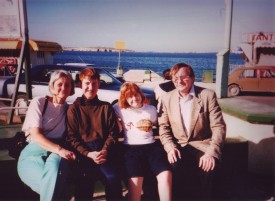 Our family on holiday in Malta

Now to the future Christopher is a resident in a MacIntyre house in Crownhill, along with 6 other similarly-placed people who receive care from established staff.  However Clare has been less fortunate in that when she left home at the age of 19 she found being in a custom-built, self-contained flat in the Emerson valley area was too radical a change which resulted in her committing an offence against another client.  This has placed our daughter in an unfortunate set of circumstances ranging from Crown Court appearances to incarceration under the Mental Health Act 37/41 and detainment in Holloway Prison for 7 weeks and after that at 2 secure hospitals in different parts of the country.  Clare is now at a Rehabilitation centre in Birmingham so at the age of 34 she has had very little experience of ‘normal’ living. 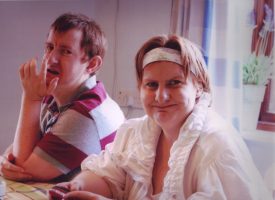 As William and I have passed our three score and ten vintage, it is very concerning for us both to have any idea as to what will happen to our children when we are no longer here and I would say this is the main concern of any parent(s) in our position.

This story is contained in our book called “Chris and Clare: What a Pair” which can be obtained from Mrs. Flanagan, 57 Passmore, Tinkers Bridge, Milton Keynes, MK6 3DY price £12.