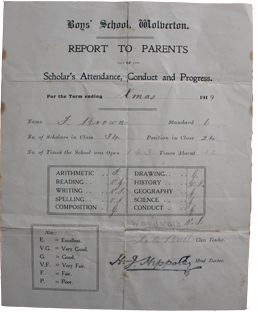 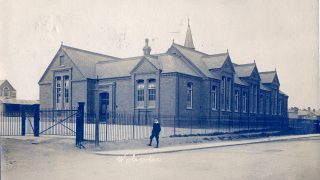 Wolverton Boys’ School was in Church St., where Wyvern Nursery is today. This is the report of Frank Brown when he was 12 years old. He was in Standard 6 (year 8 today) in a class of 34 pupils. The subjects show the emphasis given to English – reading, writing, spelling and composition are all separately rated. His ‘Very Fair’ rating in Woodwork does not seem a good start for a man who later became a skilled Finisher in the Works!

The Headmaster of the School was Harold Hippsley and he had been head for many years.

Frank’s class teacher was L.O.Bull, a teacher that many boys of the day have very vivid memories of. His full name was Lorenzo Orson Bull but the boys (out of his earshot of course!) called him Lorenzo ‘Orsemuck Bull!