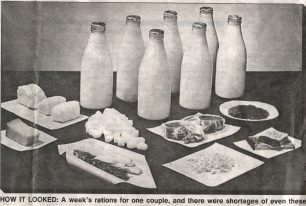 Chattering voices broke the stillness of the autumn morning. The evacuees had arrived and were being distributed to householders with a spare bedroom. Some clutched nervously at a brother or sister and each carried a gas mask in a cardboard box which was hanging around their neck.

The journey had started as a big adventure. A long journey on a dirty steamy train. For many it was their first outing away from the noisy bustle of London. Now, as they stepped onto the platform at Bletchley, fear and bewilderment showed in their faces as they realised Mum was far away and they were with strangers.

Some would be lucky and would be staying with a kindly ‘aunt’ or ‘uncle’ but others would be less happy. They would be expected to help with heavy household chores which would tire out their skinny bodies.

Even clean, fresh country air, home grown food and the novelty of indoor toilets would not take away their homesickness but, as they settled down, the wide open spaces encouraged them to explore.

Some evacuees did return to London. Their mothers were happier with their children close by. As their husbands were away fighting, they selfishly needed the comfort of their little ones beside them.

Those who did return had many tales to tell of the wonders they had encountered. Some had only seen farm animals in picture books and those who had experienced the wonder of a cow being milked could not imagine how the milk got into a bottle. One little lad recalled, “I saw eggs being laid, Mum.” His face was screwed up in disgust. “Do you know what?” They came out of the chicken’s bottom.”