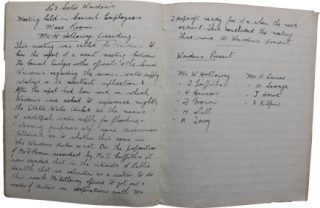 In April 1937 (two years before Second World War actually broke out), to protect civilians from the danger of air raids, the government decided to create an Air Raid Wardens’ Service and during the next year recruited around 200,000 volunteers. These volunteers were known as Air Raid Precaution Wardens. Their main purpose was to patrol the streets during blackout and to ensure that no light was visible. They were also responsible for the handing out of gas masks and pre-fabricated air-raid shelters (such as Anderson shelters, as well as Morrison shelters), and organised and staffed public air raid shelters.

Frank Brown was an Air Raid Precaution (ARP) Warden in Wolverton during the Second World War. This Minute Book records the goings on at the meetings of the No.3 Sector Wardens, who operated in the Wolverton area. The meetings were not very eventful affairs – luckily Wolverton, in spite of the Railway Works, avoided bomb damage. Reference is made to asking the Council for more stirrups pumps to tackle fires and to training about how different bombs performed – phosphorus and incendiary, and later in the war, flying bombs. With the end of the war the meetings are entirely taken up with arranging annual outings with their wives – to Stratford on Avon , Windsor and Maidenhead and Southsea. In 1949 the decision was made to have annual dinners instead.