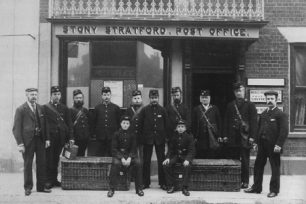 I was a Telegram boy, I started at 14. I had a uniform with a little round hat with a button on the top and a jacket with brass buttons, a leather belt with a brass buckle on it and a pouch for me telegrams.They gave me a tin hat as well. I was sixteen when the War ended. An air gunner was shot down and I had to take the telegram to his mother who lived in York Road. She came to the door and, as soon as she saw the telegram she started to cry and so I immediately knocked on next door and walked in and said , “Could you come, I think your neighbour has had bad news.” But there were several like that during the War.

Apart from the town in Stony Stratford, I regularly delivered telegrams to Old Stratford and Beachampton, Calverton and, on Wednesdays, I also had to deliver to Wicken and Cosgrove in the afternoons, because their post office was closed. On Saturdays, it was Potterspury and Yardley Gobion and Wakefield Lodge, which in theos days was an Army station. But there were three gates I had to lieft me bike over and it was a damn heavy post office bike and you’d get back and there’d be another one!…