You are here: Home>Archive>Bigger Brighter Better>Oral history audio recordings with Bletchley residents who moved to the town for work related reasons.>Interview with Raymond A. and Frances E Lubbock about living and working in Bletchley from the 1940s.

Interview with Raymond A. and Frances E Lubbock about living and working in Bletchley from the 1940s. 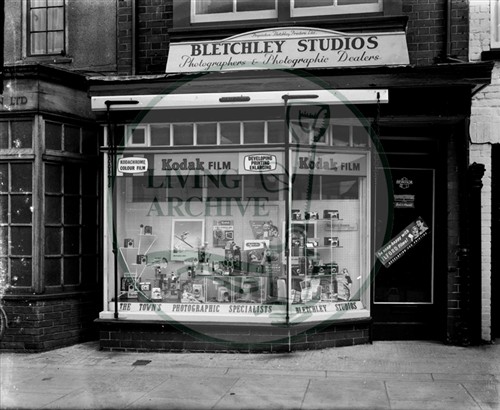 Frances Lubbock’s childhood was in Portsmouth, Oxfordshire and Brackley, Northants. Raymond Lubbock’s was in Wollaston, Northamptonshire and then Brackley. Her uncle was Harold Price who started the Bletchley Gazette with Ron Staniford. Harold Price asked her husband whose hobby was photography, to start up a photographic department for the Gazette. His first assignment was photographing the Victory in Europe (VE) day street party in Pearce (Napier) Street on May 8th 1945. The celebration had been organised by Alfie Long, from Wipac. She remembers accompanying schoolchildren to this event as she was a local teacher and taught at Bletchley Road and Water Eaton Junior Schools. In addition to the VE Day celebrations she recalls assemblies, recorder playing, and sports days.

He remained the Gazette’s photographer for four years until Bletchley Gazette was sold to Home Counties Newspapers; he remembers an arsonist burning down his dark room at the Gazette and losing all his negatives from 1945-48. Following this he set up his own photography business.

They were married in 1946 and initially lived with her aunt and uncle, until they were offered a house and settled in Bletchley.

Their joint memories include the Bletchley Show; performances by the Bletchley Park Players and school dances at Bletchley Park. He mentions that after the war, Harold Price started the ‘Bigger Brighter Better Bletchley’ campaign as Chairman of the Bletchley Urban District Council. They recall Nye Bevan’s visit to Trees Estate, the building of St Mary’s shops, the brickworks and the involvement of Italian prisoners of war. Mr. Lubbock photographed the Italians for their permits at his shop in Fenny Stratford near the Police Station; he comments on the Italians’ lack of English.

He compares the relative growth of Fenny Stratford and Bletchley, and the comparative effect of the development of Milton Keynes.