You are here: Home>Archive>Bigger Brighter Better>Oral history audio recordings with Bletchley residents who moved to the town for work related reasons.>Interview with Arthur Edward Grigg (b.1919) about the National Union of Railwaymen (NUR), family life in Bletchley, the local Council and amenities.

Interview with Arthur Edward Grigg (b.1919) about the National Union of Railwaymen (NUR), family life in Bletchley, the local Council and amenities. 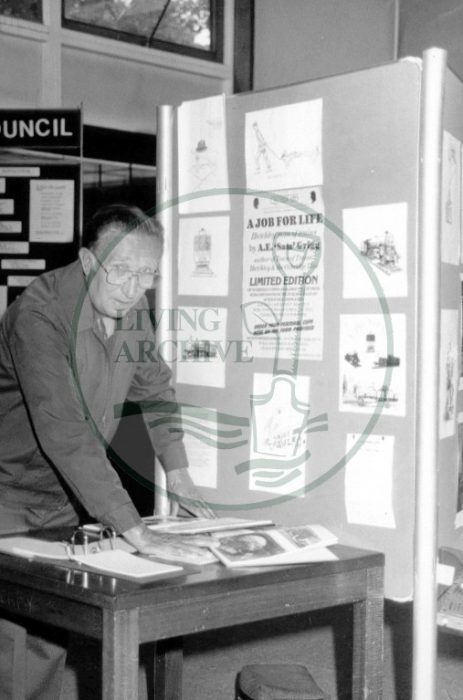 Arthur Grigg was an employee of the London Midland and Scottish railway in Bletchley & Trade Unionist. He recounts incidents involving railwaymen who refused to join the National Union of Railwaymen (NUR), and notes that eventually all railwaymen were legally required to join. He recalls leading the Bletchley NUR march in London, at the time of Barbara Castle and ‘In Place of Strife’. Fred Skelton, well-known local Communist, was in the crowd. The Bletchley Gazette reported on the march.

He was involved in the railways and NUR work all his life, so had little time to spare for other local events. He gave money to Queen’s Pool fundraising; but he thought that the loss of the Central Gardens to make the Pool was a shame. The eventual demolition of the Queen’s Pool did not distress him, he liked the new Leisure Centre.

He mentions John Smithie, whom he found ‘rather aloof’, compared with others connected with the local Council such as Harold Hudson and Sid Maycock. He moves on to talk of Councillors Cassidy, Jack White, and Duffy.

He remembers being interviewed by Brian Johnson when he came to Bletchley to record the BBC radio programme ‘Down Your Way’. There were criticisms from original Bletchley residents that the ‘wrong’ people had been interviewed.

He and his wife are happy in Bletchley and would never move back to London. He took part in Living Archive’s ‘All Change’ production, his voice being the recording describing driving a train in the fog.