You are here: Home>Archive>Bigger Brighter Better>Oral history audio recordings with Bletchley residents who moved to the town for work related reasons.>Interview with Mrs Perkins (b.1903) and Ernest Perkins (b.1904) about employment at Bletchley Park by the Leon family and the Bletchley Show. 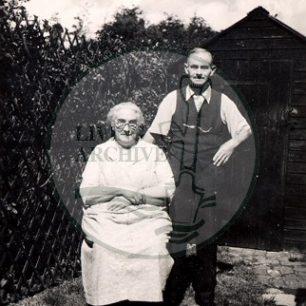 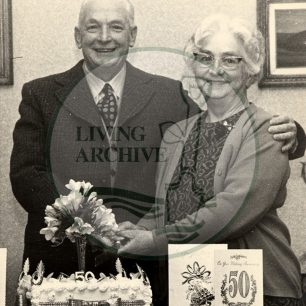 Mrs Perkins came to Bletchley as a small girl; her father worked as valet to Sir Herbert Leon, owner of Bletchley Park (BP). She attended Fenny School because the Leons disapproved of Church Green School. Her mother worked in the Bletchley Park kitchens, so she spent time in the kitchens as a young girl. She mentions members of the Leon family, and recalls how busy it was when all the family arrived for Christmas, with their servants. She recalls that in World War I the Leon family turned the Bletchley Park Pavilion into a home for a Belgian family. Lady Leon did charitable work for the Nursing Association.

Mrs Perkins worked in the Bletchley Park greenhouses from around 1917. She describes the gardens in detail, the fruit and vegetables grown, and remembers some of the staff. She describes helping in the dairy and recalls deliveries of ice from London to make ice cream, and the great variety of foods delivered from London for Christmas. She could usually have a ‘taste’ of everything. She remembers the Leon family’s other homes in France, London and Broadstairs, and joining them on holidays there with her family. She recounts various anecdotes about the seaside holidays. She met her husband at the Bletchley Operatic Society and married in 1927, holding the reception in the Pavilion at Bletchley Park.

She has happy (and detailed) memories of the Bletchley Show and fireworks: ‘Oh the show, oh well, that was great a day they used to come for miles around, there was all sorts of sports going on, cycling, running all sorts’. She disliked the fairground rides herself. Some of the Bletchley Park greenhouses were open to the public for the Show and as a greenhouse worker she had to watch over the plants so that they were not stolen.

She mentions the local doctors taht she had known – Danes, Bradbrook, Matheson, Morphy and Nicholson.