You are here: Home>Archive>Bigger Brighter Better>Oral history audio recordings with Bletchley residents who moved to the town for work related reasons.>Interview with Jim Marshall (b.1923) about his early life and the successful transfer of his music business to Bletchley from London in 1966.

Interview with Jim Marshall (b.1923) about his early life and the successful transfer of his music business to Bletchley from London in 1966. 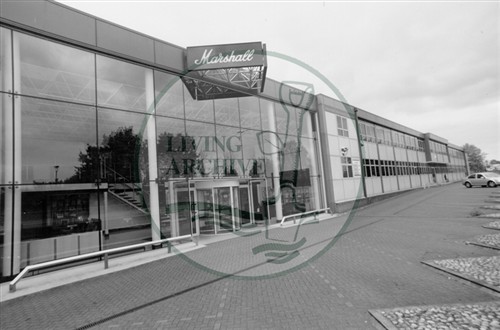 Jim Marshall was born in 1923, and suffered from ‘tubercular bones’, which confined him to hospital in a plaster cast from the ages of five to thirteen. After attending school briefly, he tried tap dancing and singing. After a try-out by bandleader Charlie Holmes he began, aged fourteen, to sing with dance bands five nights a week, also taking on small daytime jobs. After working as an engineer during the war, he resumed his career, studied drumming for four years and then became a full time professional drummer. He puts his willingness to take risks in his business life down to his formative lack of education.

He started and developed a music manufacturing business in London until the lease on the premises ran out and the Greater London Council (GLC) decided that all manufacturing should be moved/forced out of London. By chance while driving on the M1 motorway he noticed a ‘factory unit to let’ sign (the unit was in Fenny Stratford), he took it immediately. The company moved in June 1966, John Smithie arranged housing for employees and also offered land on First Avenue to build a new factory. Marshall considered Smithie to be a good leader and recalls that Robert Maxwell was also very helpful to him. Most of his workers were happy to leave London, he was also able to offer six jobs in Bletchley; there was a queue of applicants.

He bought a house in Whalley Drive, bought and opened a music shop, expanding later to three shops, including a drum studio for teaching. He was a ‘hands on manager’ personally involved in his company’s business philosophy, that included personally teaching his original employees about manufacturing aspects, quality monitoring and dealing with complaints. The company expanded to four hundred and thirty employees and trainees. He notes that Marshalls is a ninety percent export company and that it has not diversified at all; in 1981 he closed down some parts of Marshalls and re-invested the money into one business.

Socially, he remembered his employees enjoyed dances at Wilton Hall and one or two smaller venues, and entertainment in some pubs. In his opinion Bletchley was successful, although his wife hated it and he never personally came across local resentment of the London incomers.