You are here: Home>Archive>Bigger Brighter Better>Oral history audio recordings with Bletchley residents who moved to the town for work related reasons.>Interview with Frank Bodimeade (b.1928) about his National Service experiences and moving from London to Bletchley in 1960.

Interview with Frank Bodimeade (b.1928) about his National Service experiences and moving from London to Bletchley in 1960. 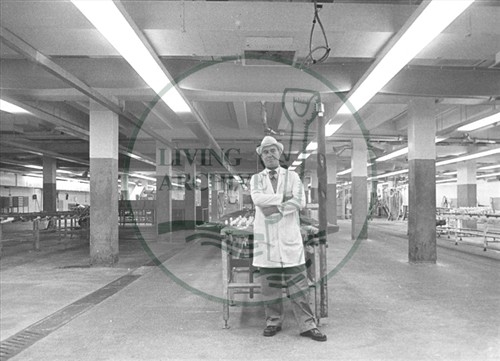 Frank Bodimeade while on National Service from 1945, was involved in the disposal of the corpses of German war criminals at Hamelin. He gives a gruesome account of hangings by Albert Pierpoint (Chief Executioner) after which he transported the bodies, by lorry for burial at Hamelin. He returned to Harlesden, and took a job driving for British Indestructo Glass Ltd. In 1960 he and his wife and two children moved to Bletchley for cheaper housing. He was able to retain his job because of Bletchley’s good road access. He drove all his possessions and his family in his Indestructo truck to Bletchley. Initially his wife felt isolated and longed for London, but he was determined to stay now they had their own house although he comments ‘… it wasn’t a very clean place then … there was mud and muck everywhere.’

When Indestructo closed down in 1967 he then worked for the London Brick Company, Terrapins and finally Scot Meats ‘the best paid firm in Bletchley’. He talks warmly about Scot’s Managing Directors, Michael Katz & Herman van Glaman and the benefits available to Scot Meats workers.

He recalls family outings on Sundays to Cosgrove Park and to Mentmore. Their daily shopping was at the local Co-op, with an occasional trip to Northampton. He remembers the Queen’s visit. He has been very happy in Bletchley and would never want to go back to London: ‘a filthy place.’ The plan to develop Milton Keynes did not worry him, he thought it would benefit residents and in his opinion the planners did a good job: ‘it’s wonderful really, it’s a real city isn’t it?’