You are here: Home>Archive>Bigger Brighter Better>Oral history audio recordings with Bletchley residents who moved to the town for work related reasons.>Interview with John Smithie (b.1912) about moving to Bletchley in 1944 as an employee of Bletchley Urban District Council and his role in Bletchley's development.

Interview with John Smithie (b.1912) about moving to Bletchley in 1944 as an employee of Bletchley Urban District Council and his role in Bletchley's development. 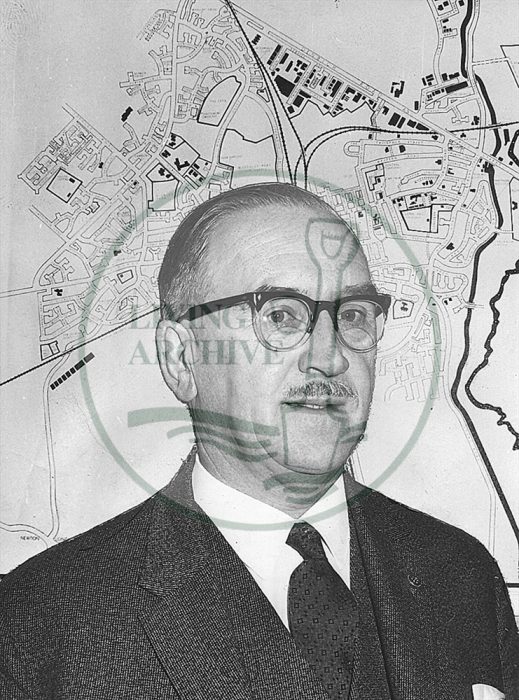 John Smithie was offered a job in Bletchley as Surveyor, Water Engineer and Public Health Inspector for Bletchley Urban District Council(UDC) in 1944 and he was eventually persuaded to accept as prospects were much better than in the North for him and his young family. He describes the technical problems of the water supply that he had inherited; it had been ‘over-pumped’ in the past.

He mentions the possible impact of the Abercrombie Report (1943) if Bletchley had been chosen as a new town at that stage. He then discusses his involvement in talks with the Ministry about the New Towns Act (1946). Heavily involved in the post-war housing developments in Bletchley he praises Bletchley UDC: ‘I said in print that they must have been the best council in the country to work for’. He refers to there being some difficulties however, with the Buckinghamshire County Council.

In addition to his role as Chief Technical Officer for the UDC he proactively promoted the advantages of Bletchley to outside companies looking for new sites. He mentions Wipac, Kemble, Barlow-Whitney, Scot Meats and refers to various industrial estates. He attended many discussions at the Ministry about housing developments, under the Town Development Act. Discussions with the London County Council (LCC) were productive; they were very cooperative about planning for London overspill for example in the Lakes Estate. He talks of Fred Pooley, County Engineer, and their discussions about a ‘monorail city plan’; this was never accepted but replaced by the Milton Keynes (MK) new town plan.

He talks about local amenities and sport and briefly about the issue of high-rise blocks. He was 100% behind the plans for MK, but could not become very involved because of his age; he retired in 1974.