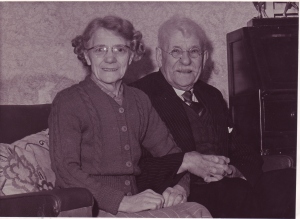 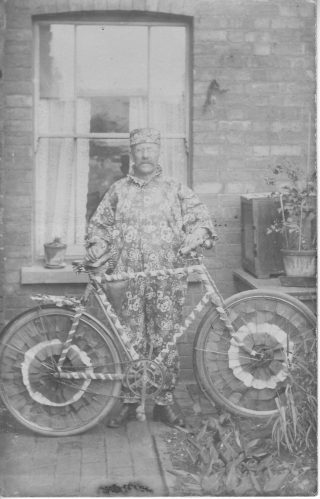 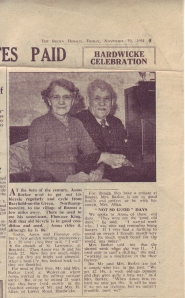 At the turn of the century, Amos Barker used to get out his bicycle regularly and cycle from ‘Brayfield-on-the-Green’, Northamptonshire, to the village of ‘Bozeat’ a few miles away. There he used to see his sweetheart, Florence King. Still that old bicycle is in good condition and used. Amos rides it although he is 86.

Today, Amos and Florence celebrate their Golden Wedding Anniversary. It is 50 years since they said, “I will” in the church of ‘St Lawrence’ at ‘Brayfield’. Then Amos was 36 and his bride was 22. Now they are much older, but still they are bright and cheerful. After a hard life they looked back and they are thankful.

For most of their lives, Mr. and Mrs Barker lived at Wolverton where Amos worked in the railway carriage works. But since he retired 21 years ago they have lived mostly in the thatched cottage of Mr and Mrs H. Allen of ‘Lower Road, Hardwicke’.

For, though they have a cottage at ‘Bozeat’, Mrs Barker is not ingood health and prefers to be with her cousin, Mrs Allen.

“NOT SO GOOD OLD DAYS”

We spoke to Amos of those old days. ‘They were not the “good old days” he said. “I started work when I was nine and remember being hungry. If I ever had a farthing to spend on sweets I thought myself very lucky. It’s much, much better for the young ‘uns today.”

Mrs Barker told me that she started work when she was 11. “I usedonly to earn a shilling.” she said “working as a machinist in the shoe factory.”

But Mr. and Mrs Barker are not a couple who live in the past, “We get £2.14s a week old age pension and that goes quite a long way” said Mrs Barker. “When Amos first retired we only got 10s. It will be nice if we get an increase, but we mustn’t grumble, must we?”

I remember visiting Uncle Amos and Aunt Flo at their cottage in ‘Bozeat’. Uncle Amos had lost his sight and had to ‘feel’ my face to get a picture of me in his mind.