You are here: Home>Local history>Areas>Wolverton>Development around the Wolverton Vicarage - Lynn

Development around the Wolverton Vicarage - Lynn

We married in London in 1965 but it soon became obvious the rents in London were unaffordable on the wages we were earning.  Equally, house prices were out of our reach and mortgages were unobtainable at that time.  After a year of struggling to manage we heard that the London County Council were to start offering 100% mortgages on several overspill areas.  I can remember using a pin to decide where to move to!

We eventually moved to Bletchley in 1967.  The name of the new town had only just been decided and the first roundabout had yet to be built.  We enjoyed living in Milton Keynes – the environment, the open spaces, education etc. were ideal for bringing up our young family and we found the constant building and changing as Milton Keynes developed quite exciting, but somehow we never really felt at home in Bletchley and as our family grew up we really wanted to move away from an ‘estate’ environment.

We spent some considerable searching for somewhere different and individual and were lucky enough to discover that three houses were to be built in the grounds of the Old Vicarage of St George the Martyr Church in Wolverton.  It sounded promising as we already knew Wolverton fairly well and we had several friends living in the town. We 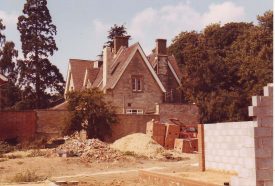 New houses being built in the Vicarage garden

first went to see the site after work one evening – the building at that stage was only about three feet high and surrounded by a lot of very tall trees.  In the gloom of the evening light I felt it was a bit oppressive but fortunately my husband saw the potential and we went ahead with the purchase.  It was the best decision we ever made and we moved in when the house was finally finished late in 1984.

That first Christmas in our new home, we were invited by the then owners to ‘The big house’, i.e. the old Vicarage, for drinks. The Rev Jones, who was then the Vicar of St George the Martyr, was also there with his wife and son and we gradually started to learn a bit more about the history of the place.

We already knew, of course, that Wolverton was a railway town – in fact the first specially designed railway town in the world. In 1838 the London and Birmingham Railway Company decided to build carriage workshops approximately halfway between the two cities. A workshop was necessary as early railway engines were unreliable, requiring maintenance and an overhaul after travelling 100 miles.  After some evaluation Wolverton was selected as the most suitable site as it possessed good existing transport links including its position on the Grand Union canal and its proximity to Watling Street. 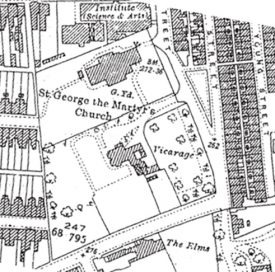 Map showing the original size of the Church and Vicarage land

By 1840 the Railway Board was concerned for the spiritual welfare of its workforce.  The Radcliffe Trustees had generously offered land for a Church, churchyard, vicarage and garden, plus an annual contribution towards the support of a clergyman.  The land they offered was from the churchyard wall alongside the present-day Agora car park in the north as far as Green Lane in the south and from Ledsom Street (now St. George’s Way) in the east to the alleyway running along the end of Buckingham Street and Aylesbury Street in the west.  The foundation stone of the Church was laid in 1843 and the vicarage was built about the same time.  St George the Martyr Church is believed to be the first church in the world to be sponsored by a railway company for the spiritual betterment of its workforce and their families, then some 800 people.

Sometime in the 1960/70s, part of the south side of the Vicarage garden along Green Lane was sold and a pair of semi-detached houses, a number of bungalows and a small apartment block known as Bushfields was built.  In the early 1980s the Church decided to sell the Vicarage 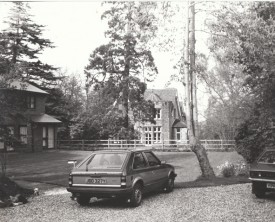 The old and new Vicarages

itself but retain the western side to build a new Vicarage although this too has since been sold to private buyers. By then the privately owned Old Vicarage (now renamed Cedar Lodge) was left with a very large and somewhat unkempt garden and so the owners decided to sell the area between the house and St George’s Way to developers who built three houses – the first of which is where we now live.

We learnt from the Vicar that the area where we live had in fact been the old kitchen garden and where they used to hold the summer fetes.  In fact when we started to clear the garden we realised it must have also held their rubbish dump – we found several old Victorian bottles, some broken pottery and several very small horseshoes – presumably from donkeys or Shetland ponies giving rides at the fetes.  We also had more than one person turn up that first year to ask what had happened to the old fruit trees – apparently they were used to coming to the garden and helping themselves!

At that first Christmas meeting we also discovered that The Rev Jones’s son, Chris, was at University training to be an architect.  We remarked that we wanted to build a brick shed and he kindly offered to draw the plans for us.  He came round to our house a few days later full of enthusiasm saying he had a fantastic idea for an L-shaped shed 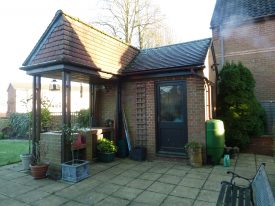 incorporating an under-cover barbeque area!  Not exactly what we had originally envisaged but it seemed like a good idea and so, we believe, we became the only people in Wolverton to have an architect designed shed!  Chris popped in a couple of times when he was home from University to see how the building was progressing but unfortunately he died in a road traffic accident before it was completed. 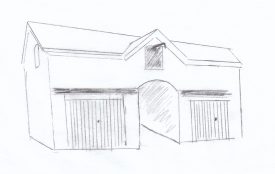 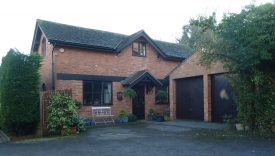 The next development in the area was the renovation and conversion of the coach house at the south-eastern side of the Vicarage.  When we first moved into our house in 1984 the coach house was a rather dilapidated building that had an archway right through the middle leading to a stable yard behind and large doors either side of the archway where the horses and the carriage would have been kept in Victorian and Edwardian times.  Above the archway was a boarded-up opening with a large metal hook where hay, straw and feed would have been hoisted up and stored in the roof area.  In the mid-1990s the owners of the Old Vicarage sold this to a developer who converted the building into a three-bedroomed house.

Although this small area now has a total of 21 homes i.e. five single story homes, two semi-detached homes and eight flats (Bushfields) along Green Lane, three detached houses, the converted coach house and, of course,the Old Vicarage and the former New Vicarage, and is situated only a couple of minutes away from Wolverton town centre, the environment still maintains a healthy wildlife population. Many of the tall trees remain, most having Preservation Orders on them.  In our garden alone we see quite a large variety of birds throughout the year – gold finches, green finches, chaffinches, woodpeckers, blue tits, great tits, long tailed tits, coal tits, wrens (one pair of which made a nest in one of our hanging baskets and produced 7 babies), dunnocks, blackbirds, pied wagtails, starlings, blackcaps, sparrow hawks, thrushes, mistle thrushes, the occasional fieldfare, nuthatch, treecreeper, jay and firecrest and even, on one occasion, three bright green parakeets!

We have regular visits from squirrels and hedgehogs, a pair of mallard ducks every summer, wood mice living under the shed, slow worms, foxes and we once saw a montjak deer in the driveway. 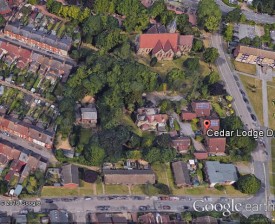 I would like to think that this small oasis will not be developed any further but with the constant need for further housing, it may only be a matter of time.