'The Ambulance Train' song, inspired by this newspaper report and written by 'J' Cunningham for the local musical documentary play Days of Pride and performed by The Living Archive Band 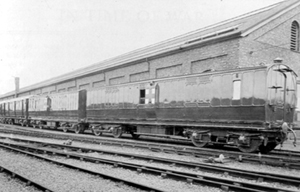 The Ambulance train, in the Wolverton Works yard 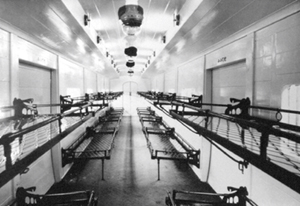 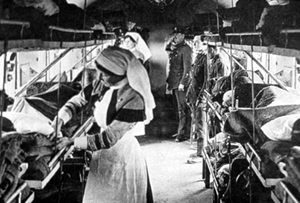 During the First World War, the people of Wolverton and surrounding area had the opportunity to view the new Ambulance Train, built in the Railway Works, which would be used in France. The train was on view to the public in the Carriage Works at Wolverton from 2pm to 5.30pm on Saturday 25th March 1916 at a charge of 6d per person, with the money collected being added to the Works Relief Fund.

What the newspaper said

Extracts from an article from the Wolverton Express, 24th March 1916The train consists of 16 vehicles and the total length is well over 900 feet; it has accommodation for 362 patients, together with the medical and other staff. These 16 vehicles comprise:8 ward cars for lying-down cases1 ward car for lying-down infection cases1 ward car for sitting-up infection cases1 kitchen and mess room car1 kitchen and stores carPharmacy carPersonnel carStaff carBrake and Stores car

The whole train is painted khaki colour outside and this has given rise to the popular name in the Works of the “Khaki train”. A large red cross on the outside of each vehicle indicates beyond any possibility of mistaking the purpose of the train when it is in use…

Thoughtful provision is made for the needs of the patients in the shape of portable electric fans, paper racks, ash trays, spittoon holders and other details. Each ward has its own drinking water tanks, cupboard and dresser and lavatory. The ward car for the sitting up infectious cases has no upholstery; the seats and backs are of three-ply wood which can be very easily washed down and kept free from germs…

The pharmacy car will perhaps attract as much attention as any on the train. It includes a medical comforts’ stores, an office for the Officer Commanding with safe, writing desk and other fittings, a treatment room (zinc lined)’with operating table, appliances etc., a fully equipped dispensary and a linen store.