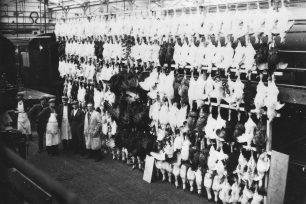 The photograph shows the display of the prizes for the Annual Christmas Raffle in Wolverton Works (date unknown).

Raffles for benevolent funds became a major part of life at the Works. It all started in the 1940s or 50s when one man brought a bouquet of flowers to work, and after much amusement from his fellows, ‘raffled it off’. A tradition began of raffling forty or fifty turkeys each Christmas (by 1976 they were hampers), at a penny a ticket. Eventually as many as 250,000 a year were sold. The money went to Renny Lodge, a former workhouse at Newport Pagnell that became a nursing home for the elderly. The Works raffles paid for Christmas fare for the patients, as well as for the installation of a sister and call system. In addition, ‘the majority of shops (in the Works) had their own little funds.’ These were benevolent funds ‘helping chaps when they were off sick.’

It was obviously a huge event, but one that at some points in its history was tinged with scandal, as Newman Willis, a former employee and prominent Union official in the Works recalled when interviewed in 1986.