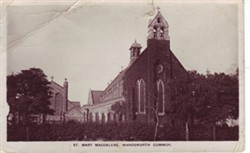 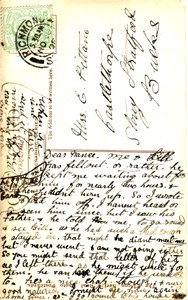 Black and white bordered photographic postcard showing back of large church. Back wall covered in ivy. There are trees and a hedge in the foreground. At the bottom is the text “St Mary Magdalene, Wandsworth Common”. The card is addressed to Mrs Pittam Castlethorpe Stony Stratford Bucks The message reads “Dear Nance. Me & Bill has fell out or rather he kept me waiting about for him for nearly two hours + he didn’t turn up. So I wrote and told him off. I haven’t heard it seen him since but I saw his father & he told me to go round and see Bill as he had such a bad cough and stayed in the night he didn’t meet me but I never went. I am not going either so you might send that letter of his as I left there as he might write for them. he can [?] them if he wants to. he’s a nice chap though + very good natured. I might see him again some time as I go round to his house when he isn’t there. send it tomorrow morning if you can. Love to all Dora”. The remains of the postmark say 2RICHMOND 5.30PM NO 25