You are here: Home>Archive>Bigger Brighter Better>Oral history audio recordings with original residents born in Bletchley (1913-1951).>Interview with Meg Bates (b.1936) about wartime memories of growing up in Bletchley.

Interview with Meg Bates (b.1936) about wartime memories of growing up in Bletchley. 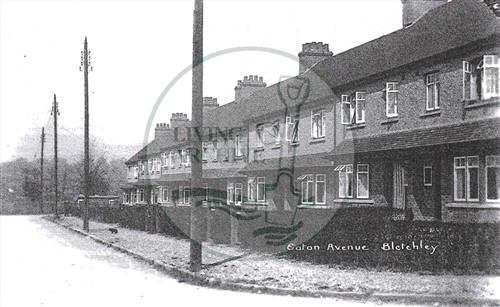 Meg Bates was born in 1936 at her aunt’s house in Eaton Avenue, Fenny Stratford; her mother was born in Nottinghamshire, her father in Fenny Stratford. He had been disabled by polio and worked at Roots brush makers in Tavistock Street; they were producers of handmade brushes, he worked in a section where the workers all had some disability. His job involved working with hot pitch; she recalled how she would meet her father as he cycled home from work. Her mother took in washing, and would ‘wash, mangle, and dolly, then do the ironing’, including the sports kit for Bletchley Road Junior School. When she started work she bought her mother a washing machine.

She did well at primary school (‘I was a goody goody’) and earned gold stars which entitled her to a free Saturday cinema ticket. She gained a scholarship to Wolverton Grammar School and travelled there by train. She remembers Fenny was quiet in those days, no traffic; Aylesbury Street had more shops, proper local shops and little corner shops. Children were allowed to play out in the street, playing hopscotch and ball games, they could play two balls against the house end wall, although some residents complained.

During the war people were billeted in Bletchley; the couple next door had Women’s Auxiliary Air Force (WAAFs) from Bletchley Park. ‘We knew Winston Churchill came to Bletchley Park by train, he came through the Spinney between the station and the Park but it was all top secret. Nobody really knew what was going on’. She remembers rationing during the war and that her mother would swap ration book coupons. After the war there were street parties in Dighton’s field between Western Road and Tavistock Street, with trestle tables and a marvellous tea. ‘I have a photo of Fred Bates (no relation) chair of Bletchley council kneeling down by a box of oranges giving one to each child, the first orange I remember, I also remember the first banana I’d seen’.

At that time there were limited local employment options available for girls, mostly factory work, so she decided to teach and gained a teaching qualification at a college in Liverpool. Returned to teach in Bletchley, married a fellow teacher in 1961, bought a house in The Grove and gave birth to twins in Northampton Hospital in 1963 as there was no local hospital.

Her parents were politically very right wing, the constituency was always Conservative or Liberal till after the war then Labour got in. Aiden Crawley was the centre of a big rally in the Leon recreation ground where she recalls the children were dragged onto the bandstand and a woman was there ‘warming us up’, teaching us a song ‘about Aiden Crawley’. ‘I don’t remember much about ‘Bigger Brighter Bletchley’ but Dad’s cousin was Harry Dimmock, a Labour councillor… he and Harold Price (another councillor) were wanting to improve Bletchley. They decided to buy up several of the houses in Bletchley Road (residential area) and turn them into shops …there was a little row of cottages who refused to sell. In the end it was compulsory purchase’.

She briefly mentions local characters, such as the cinema manager and the arsonist who burnt down the Co-op. Describes the Bletchco Players and the Bletchley Operatic Society and their productions that would ‘pack the Wilton Hall.’ At various times during the 1960’s and 1970’s she and her husband lived abroad. On her return she noticed that with the advent of Milton Keynes, Bletchley was becoming drab and second rate ‘…so many shops are now boarded up … the stuffing seems to have been knocked out of the place’.