You are here: Home>Archive>Bigger Brighter Better>Oral history audio recordings with original residents born in Bletchley (1913-1951).>Interview with John Christie about farmwork, Bletchley cattle market and the effect of the development of Milton Keynes on farming.

Interview with John Christie about farmwork, Bletchley cattle market and the effect of the development of Milton Keynes on farming. 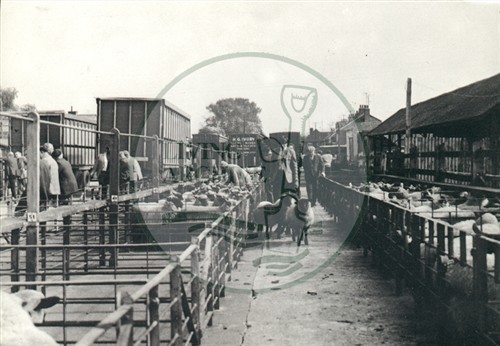 John Christie lived in Shenley after the war and recalls Bletchley being very small. There were few amenities, including ‘under the old bridge two or three little tin shops’. He used to go to the Studio cinema in Bletchley where ‘there was always queues’ and occasionally to the County cinema in Fenny Stratford. Socially, dances were held at Wilton Hall, the Yeomanry Hall and some at Bletchley Park which were organised by the Army. Stony Stratford had the best local shopping and people would also travel to Northampton market. He remembers Bletchley pubs such as the Denbigh Hall, the Park which was used for farmers’ business deals and the Halfway House. He was a regular at Bletchley Operatic Society shows, established in 1952, and recalls Young Farmer’s Club meetings at what was then Leon School in Bletchley Road.

A farm worker at Home Farm and Grange Farm, he walked sheep and cattle from Shenley to Bletchley market, a distance of over three miles. It was a good market for smaller local butchers however Banbury market was bigger and was held on the same day. Recalls Mr Johnson, the auctioneer, old Mr Wheeler the porter, and an old fellow called Paddy, a drover ‘[I] think … lived at the Bottle Dump’. J.C. would walk the livestock down Shenley Road, but problems developed when the new houses were designed with open plan gardens and the animals ended up in people’s gardens. The insurance claims that followed were fairly substantial and lorries were then used.

When he first started the livestock came by rail from up north. They would then be walked down from the station straight into the market. On more than one occasion animals would go missing; if cattle or sheep are frightened ‘away they go’. They strayed all over Bletchley at different times; ‘lost a sheep once which found an open door, went into a chap’s kitchen, [I] found it under the kitchen table. Chap wasn’t too pleased’. He also remembers driving cattle under a bridge near the brickworks at Newton Longville, when a ‘diesel horn blew, about fifteen cattle took off … one ended up in Cleaver’s Shop, absolute disaster, police then stopped the driving of cattle’. Lorries were used from about 1953 because of the difficulty controlling the animals on foot.

The market was frequented by local butchers, Mr Wayne from Fenny, Alf Bentford and Peter Pollard from Newton Longville. They also travelled to Leighton Buzzard; all business went there when Bletchley closed. He remembers the reaction of some of the London incomers as some of them had never seen livestock before. He describes the inevitability of losing farmland as plans for the development of Bletchley and Milton Keynes were released ‘I mean you could object but it was on the cards, that was it, there was nothing you could do about it’.