You are here: Home>Archive>Bigger Brighter Better>Oral history audio recordings with original residents born in Bletchley (1913-1951).>Interview with Eileen Corden (b.1923) about Bletchley, the Queen's Pool and the swimming club.

Interview with Eileen Corden (b.1923) about Bletchley, the Queen's Pool and the swimming club. 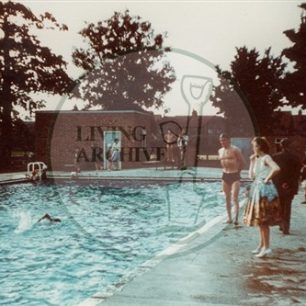 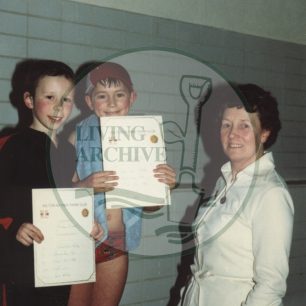 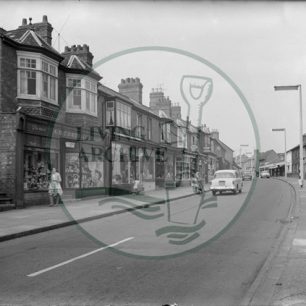 Eileen Corden was born in 1923 and lived in Woodbine Terrace, Bletchley. Her father was wounded in WW I and then worked as a postman. Her father-in-law was the local chemist. She started working in a grocery shop when she left school at fourteen, to ‘…learn cashier’s job’ but was a ‘…jack of all trades’. Her sister went into a shoe shop, and her younger sister worked for the Post Office. ‘I always wanted to do hairdressing but aunt told Mother not to allow it as she knew someone who had caught disease from hairdressing’.

She worked in the grocers shop all through the war (now a motorbike shop in Victoria Road) helping her boss with the local orders. Her husband was also local and they married in 1946, he was called up after the war to serve in Germany. She describes resentment about the allocation of housing, and the effect of the influx of people after the war on business at the chemist shop where she worked.

Recalls how the ‘Bigger Brighter Better’ campaign upset some locals, they realised that Bletchley needed the expansion but were fearful of the loss of the open spaces and countryside.

She mentions the local cinemas, the Bletchco Players & the Operatic Society, Wilton Hall, the local carnivals; her lifelong involvement in the Guides, and changes to Guiding over the years.

Swimming was her major interest; she described the anger at the delay in building Queen’s Pool and the disadvantages of the pool that was eventually built in 1955. She was a member of the swimming club, both she and her husband were on the committee and have lots of swimming records. She then describes why she was annoyed that the new leisure centre would not have a conventional pool: ‘everybody was up in arms’, and recounts the later history of the swimming club at Leon School, and its changes as Milton Keynes developed.

She recalls local doctors and the lack of a hospital, how she took her children to watch the Queen’s visit, and comments on Robert Maxwell MP. In her opinion Bletchley has gone downhill, with many fewer shops, due to the effect of cars and supermarkets.