You are here: Home>Archive>Bigger Brighter Better>Oral history audio recordings with original residents born in Bletchley (1913-1951).>Interview with Bruce Hardwick (b.1927) about local politics and housing in Bletchley.

Interview with Bruce Hardwick (b.1927) about local politics and housing in Bletchley. 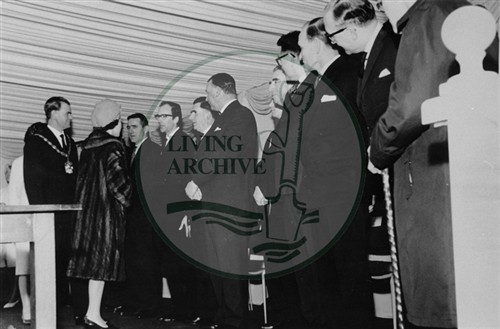 Bruce Hardwick was born in Bletchley in 1927. He recalls family life and his father Horace, who was a leading horticulturalist. When his father died he took over as secretary of the Bletchley Community Centre Show. Educated at Wolverton Grammar School from 1939 he remembers the effect of the war on his education, mentions memorable teachers and the headmaster D. E. Morgan. Refers to rivalries between school ‘houses’, and between Bletchley and Wolverton football clubs. His first job was with the Post Office; he was invalided out of National Service, and began working in accounts, firstly at Marston Valley Brick Company.

In the 1950s he initially joined the Labour Party, however, he later became a Liberal and in 1961 was Councillor for Eaton Ward. He recalls the occasion when it was decided, mainly due to John Smithie, to ‘promote a campaign to try and establish …a bigger Bletchley. Bletchley was ideally situated as it was on the main railway line and the A5’. Recalls the Council were overwhelmingly in favour and discussed development plans including the Pooleyville plan. He was on the Housing Committee, and refers to some of his fellow councillors, Robert Maxwell and the changes as new residents began to join the Council. He was proud to be involved in the computerisation of the Council in c.1965. Remembers local feeling about Milton Keynes development plans, and the transfer from Bletchley Urban District Council to MK Borough Council. He mentions various political issues: resentment between MKDC and MKBC; the advantages of parish councils; changes that come with a unitary authority and comparisons between the marketing of ‘Bigger Brighter Better’ Bletchley and Milton Keynes.

Overall, he considers that Bletchley developments have definitely made it a better place to live than it would have been.