Interview with Dickey Arnold (b.1920) about Bletchley cattle market. 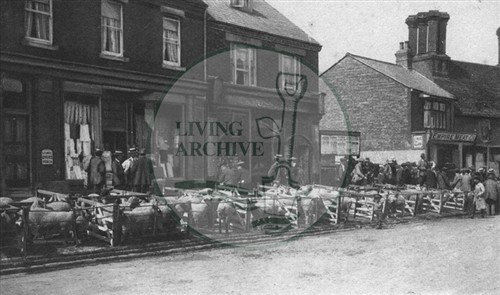 Dickey Arnold describes Bletchley cattle market’s history from the 1920s when Aylesbury Street in Fenny Stratford, was first penned off to enclose livestock. This was why the old pub in Fenny was called the Bull & Butcher. He went into partnership with W. S. Johnson the estate agent who owned the cattle market and eventually became the main auctioneer when Johnson retired in c1963.

By the outbreak of war in 1939 the market was quite well established, but with meat rationing all livestock markets were closed until 1954.

From 1954 onwards the market flourished, Bletchley’s success was due to the nearby railway. Every Thursday, they used to drive cattle from the market to the cattle dock and onto the trains for Birmingham or Islington; the Beeching axe in 1962 adversely affected this trade. They held very popular shows of dairy cattle, young stock, store cattle, dairy cattle and an enormous Christmas fat stock show. They were in competition with the markets in Bedford and Northampton, getting up to two hundred cattle a week, eight hundred sheep and a lot of pigs. However, a serious foot and mouth outbreak in 1967 shut down the market completely for a time as thousands of cattle were slaughtered, which was devastating. At that time the brickworks at Newton Longville, Skew Bridge and Captain Mells and his Flettons Brickworks were ‘working flat out’ and the whole area was quite prosperous.

This would all end with the designation of Milton Keynes (MK). North Bucks farmers opposed it, but at the public inquiry in Wilton Hall the new development was overwhelmingly confirmed. `We thought that the overspill scheme had worked quite well for Bletchley, it had increased the population from about 8,000 to about 30,000′. Approval of MK meant major farmland purchases and in 1979 the closure of the market and associated paddocks, to accommodate Sainsbury’s and its car park. D.A. acted on behalf of farmers who lost their land and describes the choices made by local farmers, such as Jack Peverel.

Bletchley had prospered during the London overspill development but declined as MK developed. He mentions MPs Aidan Crawley, Sir Frank Markham, ‘Captain Bob’ Maxwell, and Mrs Kellett-Bowman, several local councillors and Ron Pollard the ironmonger. In his opinion Robert Maxwell destabilised Bletchley; he recalls Maxwell’s disagreements with the Conservatives. D.A. admired the work of staff at Milton Keynes Development Corporation, particularly Alan Ashton, and Fred Lloyd Roche, who was ‘a quite exceptional man, in my opinion’. He felt that they did a superb job.