Interview with Barrie and Ted Field 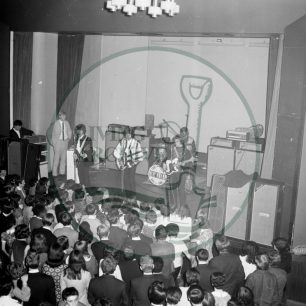 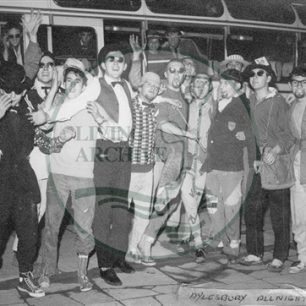 Bletchley Youth off for an evening of Jazz in Aylesbury, 1961. Illustrative photograph supplied by kind permission of BCHI (Accession Ref. 1891). 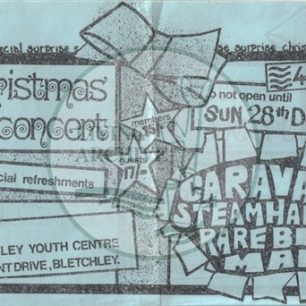 Barrie Field recalls the three years that he taught at Denbigh School. He left teaching in 1967 to run Bletchley Youth Centre in Derwent Drive, a New County initiative. It had a ‘membership of nearly five hundred without a building and I used to hire the Labour Club which is now the Salvation Army place and we used to run discos every night’. Wilton Hall was hired when bands such as the Rolling Stones, Animals, Chris Farlowe, and Joe Cocker etc. would attract larger audiences. Mentions Phil Banfield and the Barron Knights promoter Mr Knight [alias Ron King of the Gazette], who ran regular concerts at Wilton Hall. Remembers how Wilton Hall was used both prior to the war and during it.

He describes youth club management in Bucks, and the types of activities they ran and how in his opinion local youngsters and London incomers seemed to get on well. Refers to ‘skinheads … weirdos… drug-taking’, not allowing the local police to enter the club in uniform and the ‘Clockwork Orange’ murderer.

Mike Spencer and members of the club won a national Youth Club drama festival in Nottingham, ‘they produced this play which was all about youngsters taking control. Electrifying, the kids had written it themselves’. He describes his involvement with a BBC television series, ‘Working with Youth’ that investigated the subject of ‘new town neurosis’. The Youth Centre effectively became an ’employment agency’ for two local factories, Jim Marshall amplifiers ‘recruiting staff for him and Cigarette Components’.

Bletchley started to be Bigger, Better, Brighter and children surveyed in 1965/66 liked living in the area for its spaciousness and relative lack of violence. In his opinion, under the Conservatives wages and education were depressed. He felt that the later incomers were very insular because having their own homes for the first time some preferred to stay at home, rather than socialising. B.F. remarks that the politicians of the time displayed a lack of understanding of youth culture. He mentions the Pooleyville plan and ‘Pooley’s Palace’.