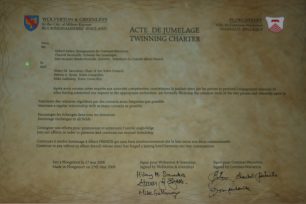 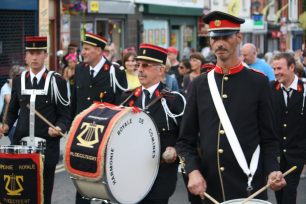 Members of the Ploegsteert band parading in Wolverton

Through contacts made between people from Wolverton with local people at an exhibition of the First World War letters of Albert French (see Object No. 54) near his grave in Belgium, moves were made to twin Wolverton and Ploegsteert. For a number of years there has been a meeting up of citizens of the two towns, alternately in Wolverton and Ploegsteert. Ploegsteert’s marching brass band has already enlivened many a Wolverton event and many new personal friendships have been developed that have been maintained outside of the official visits.

This new friendship was formally recognised with An Act of Twinning in May 2006 and then in this Affirmation of Twinning Charter that was signed by representatives from the two councils.

Besides aiming to maintain relationships and encourage exchanges, promote and continue mutual friendships, there is a special clause, to ‘continue to pay tribute to Albert French whose story has forged a lasting bond between our two communities’.

In the exchange visit in 2011, the people of Ploegsteert came to Wolverton and there was a special production of the play based on Albert’s letters.