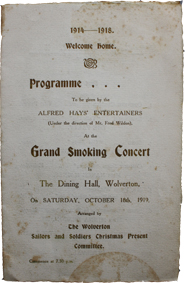 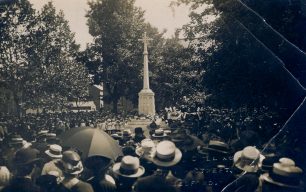 When the First World War ended in November 1918, it took the volunteer soldiers some time to be demobbed and find their way home from their units and, in some cases, from Prisoner of War camps. Wolverton was not alone in holding events for these returning ‘heroes’ and this concert was one of a number of events held in early October 1919. It was organised by the Wolverton Sailors and Soldiers Christmas Present Committee, that had held fund-raising events throughout the year to buy Christmas boxes to send to the town’s serving military personnel.

Earlier in the same month, on October 4th, there had been a Welcome Home Banquet that was preceded by a parade of all the ex-servicemen from the Western Road Recreation Ground to the Square for the unveiling of the newly built Cenotaph.

The programme belonged originally to Thomas Taylor, who worked in the Co-op grocery and served in the war with the Royal Berkshires, receiving an honourable discharge as a result of the effects of gassing.