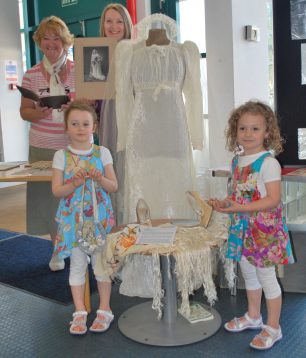 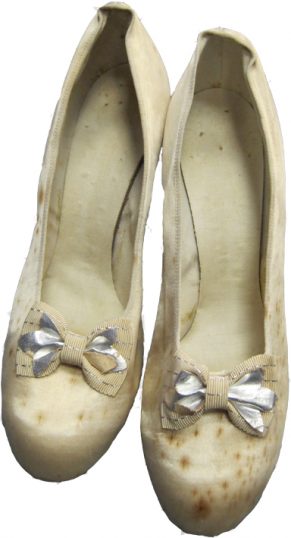 This is the wedding dress and accessories in which Beryl Louise Taylor married Frank Harry Brown on 28th October 1939 . It cost £5.19s 6d (£5.98) from E.P.Rose and Son Ltd., a well-known high class dress shop in Bedford . The receipt for the dress shows that Beryl bought it only 10 days before the wedding.

The newspaper report of the wedding states: ‘The bride was attired in a graceful gown of ring velvet in Empire style with train and white satin shoes. She wore a veil with detail of orange bloom and diamante and carried a sheaf of Irish lilies’.

The fact that the wedding was at the very start of the Second World War meant that the bride and reception guests did not suffer the privations of those who got married later in the war. Food rationing was introduced in January 1940 and the traditional large wedding cake was off the menu and the shortage of fabric led to the creative use of parachute silk for the dress.