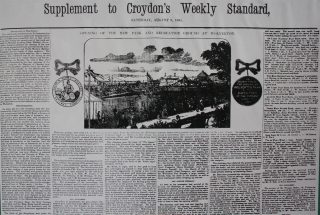 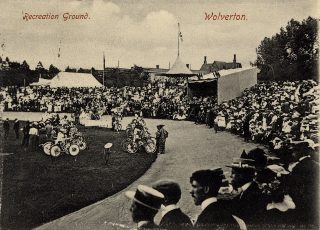 An early photo of an event at Wolverton Park

This is a facsimile of the Supplement to Croydon’s Weekly Standard of 8th August 1885 reporting, in very great detail, the opening of Wolverton Park.The London & North Western Railway Company was very benevolent to its employees and their families in Wolverton. It encouraged and supported the development of recreational activities and financed the provision of a sports ground that included an athletics track and football field surrounded by a cycling track. Wolverton Park was opened in August 1885 and became the venue for the annual two day Whitsun Sports, a festival of athletics and cycling events that attracted competitors from all over the Empire.