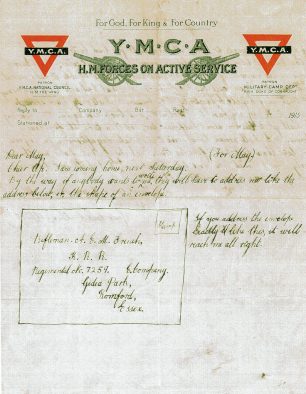 These letters, written by Albert French to his sister and father in Wolverton from his training camp and then from the trenches of France and Belgium were found at the bottom of a box of old books after a house clearance.

In that same bundle of letters was one from his sister Mabel saying, ‘you’ll be sweet 17 and never been kissed on the 22nd of this month’. [June 1916] There were also letters from the Chaplain and Commanding Officer to Albert’s father saying he’d been killed on 16th June. He was just 16 years old.

Albert’s grave is near Ploegsteert in Belgium and he is the reason why Wolverton is now twinned with Ploegsteert.(see Object 40)