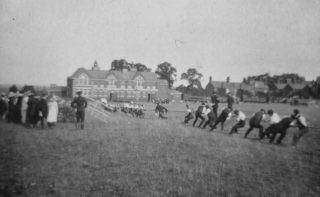 Soldiers engaged in a tug of war contest with local residents in the Wolverton Secondary School field, adjacent to the garden in Stacey Aveneue where the buttons were found

In 1913 the British army came on manoeuvres in North Bucks and camped in and around Wolverton.

Some of the soldiers were camped in the fields surrounding what is now Bushfield School and was then the County Secondary School.

Backing on to the school field were the gardens of Stacey Hill farm cottages and these buttons were discovered in one of them -3 Stacey Avenue – during the course of gardening in the 1980s.