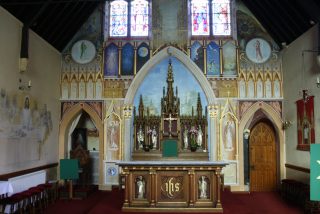 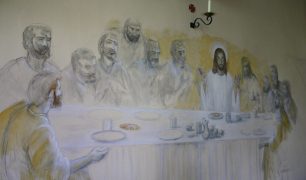 To mark the new millennium the parish commissioned an artist, Peter Yourell, to paint a mural on the Sanctuary wall that illustrated many of the most significant incidents from the story of Salvation revealed in the Bible including the 7 days of Creation, Adam and Eve in the Garden of Eden, the Ten Commandments, the Paschal Mystery – the Last Supper, Crucifixion, the Tomb, the Resurrection as the Divine Mercy – the role of the Arch angels and the role of the arch angel Michael in leading the heavenly host to gather the souls in Purgatory into Heaven. The technique used in the mural is called trompel’oeil.

The design and theological content was worked out between the Artist and Fr. Bernard P.A. Barrett. It is apparently the only Divine Mercy mural in England . Frescos had an important part to play in the history of early Christianity as many people were illiterate and so were a way for people to learn about the stories of the Bible and so now this church uses a modern form called the mural.

The Mural also reveals that the form and the layout of the church has special significance. The church signifies the sacred place of the Eighth Day and that is why there are 8 arches of time – 7 on the mural itself whilst the eighth arch is on the outside where it was originally the old entrance to the Church. The Eighth Day signifies that eternity has broken into time and heaven is united to earth because the divine is made visible in history by the Incarnation of the Divine Word in Jesus Christ. He is the Holy of Holies into whose presence we are all invited. Christ is thus shown to be the Alpha and the Omega of Creation, Time and History into whose presence the Holy Spirit gathers the people of God so as to bring them into the Kingdom of the Heavenly Father. It is this exodus into eternity that begins with baptism, which is administered from the eight sided baptismal font, and reaches its culmination, in this life, in the Sanctuary where we celebrate and receive the sacred mysteries of the Kingdom of God .