Newport Pagnell High Street in the 70s - Sue B

I came to live in Newport Pagnell when we got married in 1977.

I had never been to this area before but my husband’s family had moved up from London to Bletchley after the Second World War, so I had the advantage of a ready- made family here unlike many new settlers. Even so I missed my own family especially after we had children. I loved my job in the North but the council were offering 100% mortgages and there were lots of new houses to buy. Also there were many more career opportunities. My husband worked at Kembles’ piano factory  at Bletchley so we had a great start to our married life.

I liked the town because it was small and friendly. I felt at home because the architecture was old and set by a river which reminded me of my village in the North. I liked the old church and the High Street which had lots of shops in it.

The centre of the community was the High Street. Milton Keynes shopping centre had not been built and the big out of town centres had not even been thought of. The nearest hospital was Northampton but there was a cottage maternity hospital where most of the babies were born. At the other end of town, the old workhouse had been converted to a geriatric cottage hospital. There was a brand new health centre where the fire station is now which eventually moved to the town centre. 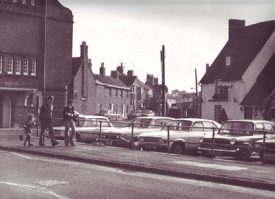 On the High street then there was a big Woolworth store, funeral directors, tiny tobacconist (where the hairdresser shop is), Odell’s – an amazing ironmongers where you could actually buy one screw or nail! (This is now a Thai restaurant) there was a florist, two greengrocers, a ladies wear shop (very old fashioned with thick stockings and big bloomers!), a fishmongers, three butchers, three bakeries, a co-op furniture and electrical shop. Here all the customers paid at the cashier’s booth. I can still remember my Co-op ‘divi’ number, 6551 – after 38 years! Once a year you went to the Co-op bank upstairs, where the bathroom shop is now, to the Co-op bank to receive your cash dividend for all the goods you had purchased over the year – and everyone thinks store loyalty cards are a new thing! We took out our first item on hire purchase from here and it felt very reckless not to pay ‘up front’. There was a grocery shop in a dilapidated state on the corner run by an Asian family who stocked exciting and exotic things like black pepper, spaghetti and curry powder! (These were things you couldn’t easily get in those days. )A fish and chip shop and family shoe shop ran on one side up to the roundabout in the town centre.

Across the road was the electric showroom where the Willen Hospice shop is now. It sold large items such as cookers, washing machines, vacuum cleaners and even fridges, although many people didn’t have them at that time. Again people would go in each week with their hire purchase book each week to pay their instalments on the larger items they had bought or to pay their electric bills or buy electric tokens for their meters. Not everyone had bank accounts and many people were still paid weekly in cash so the idea of standing orders or direct debits was viewed with a bit of suspicion. Most of us received our pay in cash tucked  inside small brown envelopes with tiny perforations along the top so you could see the lovely blue, green and brown notes tucked inside along with silver change. Somehow it felt much more tangible than an entry on a bank statement. 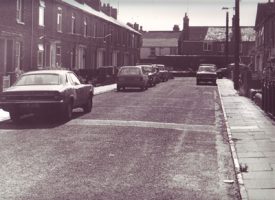 Sadly in my old village virtually all the young people had left as there was no work. These communities were wrecked by a decline in heavy industries and lack of political sympathy for traditional skills. Anyone who could leave did. It meant that when we made the journey back we were greeted by miles and miles of empty factories, mines and warehouses and the streets were full of older people who rarely saw their grandchildren and had to get used to saying goodbye to their sons and daughters who would leave as soon as they reached adulthood.

By contrast the streets of towns like Newport Pagnell, Wolverton and Bletchley teemed with new families. There was an air of optimism and aspiration for the future. The city was moving on apace and housing estates were being built all around. (I still have problems giving directions as I learnt to negotiate the growing city by simply driving down any new road which appeared to find out where it went.) At this time it was not unusual for a road to be opened without a name and labelling the roundabouts is only a relatively recent idea. Consequently, those of us who learnt our way around in this manner tend to operate with an internal compass rather than the orthodox way – we’re not very good at giving directions! Some newcomers found this constant growth disconcerting and returned to their original homes. Many of the original townsfolk felt that the identity of their towns and villages were under threat and resisted the city’s growth by remaining parish councils.

My original village was next to the heavy industrial areas of Northern Lancashire but had grown to service these communities with agricultural supplies such as milk, eggs and lamb. Unlike the outskirts of Newport the landscape I was used to was unsuitable for arable farming. I found the fields which surrounded Newport stunning. The view from the Olney bus which travelled across the open country showed vast fields of undulating gold seas of crops.

I can remember being woken up early one summer morning, looking out of the bedroom window to see a long parade of combine harvesters, like a giant agricultural army heading for the fields. This vast army of equipment was stored at Cooper’s yard (where Boots and the Health Centre is now, next door to The Dolphin) This shop had a ‘heavy duty’ salesroom where garden implements and propane gas was sold.

Looking back it seems as though the only constant things in the High street are the 5 or 6 pubs which appear in the coaching inn records, sepia photos from the past and still thrive today. I remember the sunny weekend when the sealed knot society set up camp and re-enacted a battle on Bury field common and were stood in costume outside The Dolphin pub quaffing ale – for all the world (apart from modern traffic) like it was painted by The Laughing Cavalier’ artist Frans Hals.  The ‘battle’was memorable.

My advice to visitors is to look up when walking along the street and suddenly the age and variety of the buildings becomes obvious to you.

Looking at the High street today you can easily get an impression that the shops are hanging on by the skin of their teeth. Many of the shops are now charity shops and the newest businesses to move in are betting shops and letting agencies. Of course it is a sign of the times. It may be that most of us are now well off enough to own cars so the pram pushing brigade have disappeared into cars and the out of town shopping centres which have sprung up rapidly over the last few years at the cost to the small shops.

However, Newport Pagnell continues to have a strong identity as you can witness when the annual Summer parades and fair  gather the townsfolk to cheer the floats on. The High street still lights up over the Christmas period and the ‘Lighting up’ ceremony continues to have the little children staring in wonder at the lovely lights. The iron bridge (one of only two in the world) has been renovated and new walks built on the river side. The parchment factory – the only one in Europe, still produces exquisite vellum which is sought after throughout the world and the Swan revived still feeds, waters and accommodates weary travellers as it has since the London mail coach and traveller’s stage coaches hurtled along the street and into the cobbled yard.

There is a keen Historical Society which works hard to keep information of the past and memories alive. The schools develop and thrive and the population continues to grow, made up of the familiar pattern of young parents and children. As long as this is the situation, Newport Pagnell will weather the times.