The day the Queen saw me 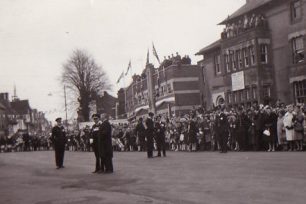 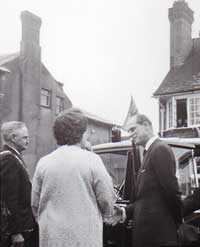 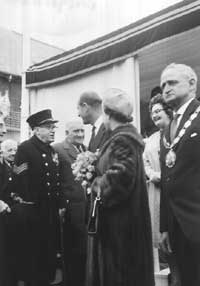 A Royal visit to Newport Pagnell

We had not long moved to Newport Pagnell, myself, my wife and our four year old son. The year was 1965.

I fell in love with Newport as I think most people do who go there. This old coaching town has a nature all of its own, and at that time lots more links with the past. To go in O’Dell’s the hardware shop and meet the brothers was to go back in time. I remember buying three half pint tins of paint there. These were duly wrapped in thick brown paper and tied up with string; I was then asked if I would like them delivered. I had to look twice to see if the question was serious, it was.

The state of the roads

But there was some thing not quite perfect with the old town and that was the state of the roads full of pot holes. I could not understand why people who were so proud of the town disgraced it with the badly maintained roads, but this was to change when Her Majesty Queen Elizabeth the Second came to town – and guess what, the road through the town was resurfaced.

The Queen comes to town

The great day finally arrived. April 4th 1966. A buzz of excitement like a Mexican wave rippled through North Bucks. The Wolverton road through Newport Pagnell was packed with people and there was not an inch of space between shoulders. Suddenly it went quiet. The silence was deafening, and then much slower then the stillness had come, a murmur of noise began to build up again. ‘Was the Queen coming at long last?’ No she wasn’t, it was a old brown mongrel that was leading the way – unable to escape from the road, it ran the whole route of the parade to the cheers of the crowds.

Finally the Queen came with a cavalcade of police cars, limousines and dignitaries. The crowd, nicely rehearsed by the dog, gave a tremendous welcome to her majesty. The Queen was wearing a politically incorrect fur coat which looked suspiciously like the old mongrel that had by now disappeared.

The Queen with the Duke of Edinburgh met some very important people on a covered platform in Market Square. These people, who now felt even more important, made some very important speeches that we could not hear and the photographers hogged and clicked, nineteen to the dozen at the royal couple. One of them turned to me and said “right we have had our turn” and he pushed me to the front of the other paparazzi, and I was allowed to have my fifteen minutes of fame. Snapping away with my Brownie Box camera as fast as I could wind. Of course this allowed the Queen also to see me but she obviously had forgotten her camera.

Food fit for a Prince

Well this was a very exiting day for old Newport, not to be exceeded by the local newspaper headlines for many years. Not until a child, prompted by a reporter, took a tin of Heinz baked beans from her mother’s shopping basket and asked Prince Charles if he would like some baked beans! This happened in the forecourt of Aston Martin Lagonda. This sensation made headline news in all of the national newspapers.