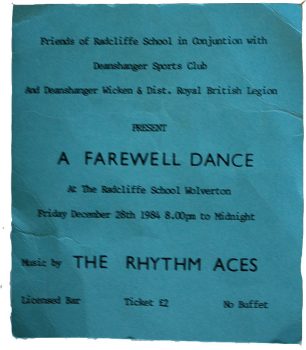 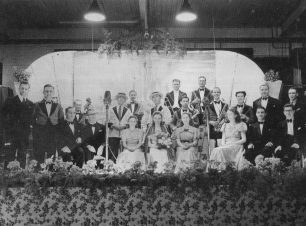 The Rhythm Aces with the Railway Queen during World War 2

The Rhythm Aces were a legendary dance band in the Wolverton Area led by Doug Dytham that began their career before the Second World War.

In 1934 Doug Frost as manager and Charlie Hardwick as leader formed their own band. They were all young workers in the railway works on low wages and without the ability to purchase their own instruments. But with a little help of some friends they managed to borrow what they needed. Doug Dytham took over as leader in 1935.

One of Doug’s ‘party pieces’ at each performance was to play music on an ordinary saw, with the aid of a violin bow.

Despite the advent of rock ‘n’ roll and disco, The Rhythm Aces always kept a band of dedicated followers and ran for almost 50 years until the band finished in 1984.Perhaps the Rhythm Aces’ most famous performance was when they were the resident band for the BBC broadcast of the Works Wonders programme, hosted by Brian Johnston (later of cricket commentary fame) in the Works Canteen in 1948.