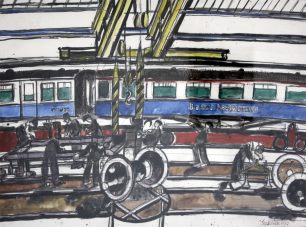 John Watson was a Wavendon-based ceramic artist whose most famous piece in Milton Keynes is the ceramic tile wall on the side of the shops at Stantonbury where he worked with students from the school.

This sketch is part of a series (most of the others are in Wolverton Library) which were ideas for a 100 yard, 6,000 tile mural depicting carriage builders in Wolverton Works that was planned to be placed on the Works wall alongside Stratford Rd.

The project never happened. The Manager of The Works turned down the final idea on the grounds of cost and the belief the mural would attract graffiti.