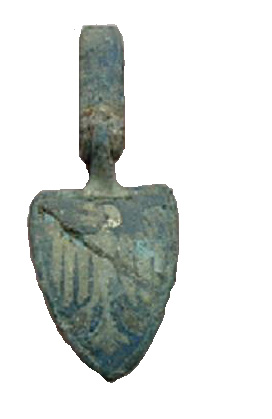 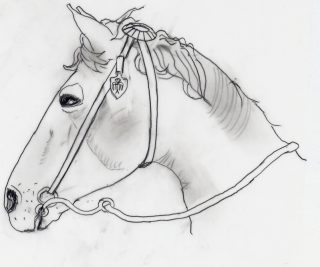 Alderton is a small Northamptonshire village, some 5 miles from Wolverton, just off of Watling Street. On the outskirts of the village are the remains of a ringwork castle, known as The Mount. It was built by Robert Count of Mortain, half brother to William the Conqueror.

In 1997, The Mount was purchased by Derek Batten, an amateur archaeologist. As the site had not been investigated before, Derek was keen to discover the history of The Mount. He requested help from Channel 4’s ‘Time Team’. They responded with enthusiasm, and spent three days in the summer of 2000, investigating the site. The schedule of work did not include a trench in the area of what turned out to be the main gateway. It was only after a long and interesting chat with a representative from English Heritage, that it was agreedthe Team could startdigging in this area. Within a short while of digging in the gateway area, a high status knight’s horse bridle pendant was retrieved from the earth. It was a rare and special find. On it, it hadthe coat of arms of Sir John de Wolverton.

So what was this item doing at Alderton Castle? The owner of the castle was a widow -Joan de Combemartin – and our Sir John de Wolverton was in need of a wife. So one can imagine Sir John leaving his great hall, that stood hard by Wolverton Castle, and riding off to Alderton to woo the fair Joan in his finest attire, his horse also in its finest trappings. However, when he passed through the gateway to the castle, the rich enamel pendant came away from his horses bridle and was lost forever… But not quite, because some 650 years later Tony Robinson and his Team excavated what you now see before you.

In its day, the hinged pendant shield would have been a bright enamel blue with a gold eagle and a red diagonal ‘bar’. To see the Time Team programme in question go to: 4onDemand Series 8 Episode 2 – ‘The Man Who Bought a Castle’