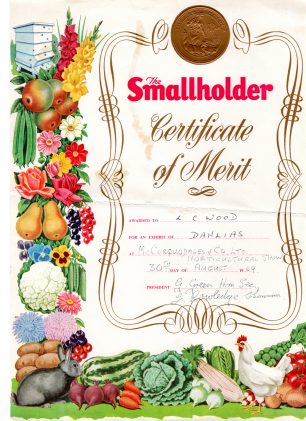 This certificate was awarded to Mr. L.C. Wood, at the Wolverton British Rail Workshops Annual Show, for 3 vases of cut blooms. The old Horticultural Shows always used to be a big event on the Wolverton Social Calendar. These were held at various venues including Wolverton Works and Wolverton Park.

It is interesting to see that Mr. Wood won an award for his dahlias only a week later at a Horticultural show at McCorquodales. There was always a special emphasis on Dahlia, Chrysanthemums and the “Fur & Feather” categories because these societies were very popular at the Works. The tradition of the annual horticultural show in Wolverton lapsed for many years until it was revived successfully in 2010 when it was held in MADCAP.