You are here: Home>Archive>Albert French Collection>Resource material used for the plays and documentaries relating to Albert French>Photograph of passage from a letter from Albert French dated November 1915 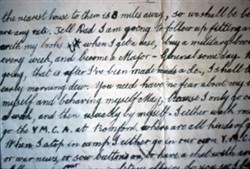 Passage from the letter headed with the information: ‘Stationed at Gidea Park, Romford, Essex’ and ‘Kings Royal Rifle Corps, November 6th, 1915’. Albert asks May to tell Dad that he will keep up the ‘fitting and turning, study hard and buy a military book a week. He will become a Major-General someday. He reassures May that he is behaving himself. That he usually goes out by himself. He walks around the town or goes to the YMCA in Romford. He also tells May that when he stops in camp he either goes to their own YMCA or sews on buttons.