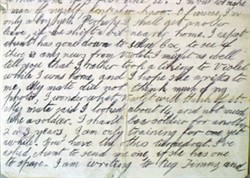 Passage from the letter is headed ’23 January’ and ‘Stationed at Witley Camp, Godalming, Surrey’. He says it was nice to come home and rotten coming back to the army. But he is going to stick at it and make a man of himself. He tells May he took a liking to Violet and hopes she will write to him. His mate didn’t think much of his photo, saying he looked about 14 years old and not much like a soldier. Albert comments that he is still training to be one. He also tells May he is writing to Reg Timms.