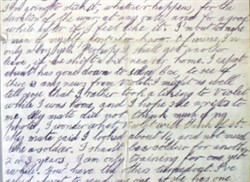 Passage from the letter is headed ’23 January’ and ‘Stationed at Witley Camp, Godalming, Surrey’. Albert tells May that he is going to stick at it and make a man of himself. He also tells May he is going to see if there is ay news from Violet and that he took a liking to Violet and hopes she will write to him. His mate didn’t think much of his photo, saying he looked about 14 years old and not much like a soldier. Albert comments that he is still training to be one.