You are here: Home>Archive>Albert French Collection>Resource material used for the plays and documentaries relating to Albert French>Photograph of passage from a letter from Albert French dated May 1915 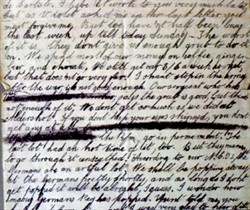 Passage from a letter that has been censored. Albert apologises for not having written to May much but he has been very busy. He complains about the lack of food and that the three shillings and sixpence he gets a week doesn’t go very far. He won’t be staying in the army after the war. His sergeant says that the food is good but there is not enough of it. Again he says that they do not get as much food as at Aldershot and that if they don’t keep their eyes skinned they don’t get any at all. Parts of the letter are censored here. Albert also talks about the Germans and expects to be popping away at them shortly and says he guesses it will be alright so long as he does not get popped. He talks about Reg and wonders how many Reg has popped.