You are here: Home>Archive>Albert French Collection>Resource material used for the plays and documentaries relating to Albert French>Photograph of passage from a letter about the death of Albert French dated June 1916 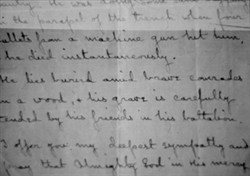 Passage from the letter headed with the words ‘122nd Infantry Brigade, B.E.F, June 17th ’16 ‘. Chaplain Mayne is sorry to inform Mr. French that his son, Albert, was killed in action on 15.06.1916. He explains that Albert was doing some sand bagging on the parapet of a trench when he was struck by four machine gun bullets and killed instantaneously. He is buried in a wood and his grave is tended by his friends in the battalion. He offers his sympathies.

Back to 708 date search results
Search the archive