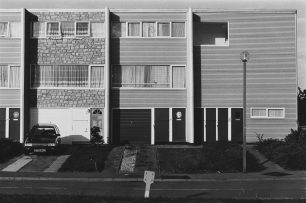 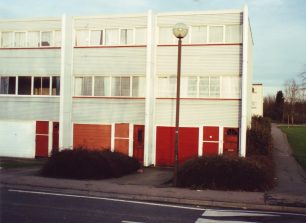 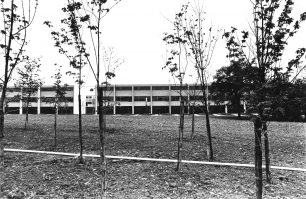 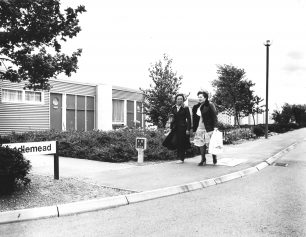 Netherfield was one of the earliest completed rental housing grid squares in Milton Keynes.

Originally, all the roofs were the same flat level. Although the houses were built on rolling farmland, the architects wanted to have the same roof-line throughout, so that single-storey and two-storey houses could be built next door to three and four-storey houses without the roof-line changing. However, so many people complained about the monotonous appearance of their houses and the need for repairs, that the building contractors had to make changes.

Despite the criticism, artists have been drawn to Netherfield: Eugene Fisk, writing in 1981 described Netherfield as being ‘abow-shaped curve of land in the south of the city…The top of the bow slopes down towards the canal, with views of Woughton and Walton beyond. The long rows of houses are corrugated metal (like Beanhill), but the height and change of colours bring us to a different place. Three-storey lengths of silvery-grey stretch across a marvellous planted site. Each house in the terraces is separated from the next by a projecting fin…’ And sculptors have created two ‘special features’ – ‘Owl and the Pussycat’ by Liz Leyh (1976) and ‘Toem Pole’ by Lesley Bonner (1979).

Taken from ‘What’s Netherfield to you?’ Netherfield’s ‘Book in a Week’, compiled by local residents.