Programme for performance of selections from Handel's Oratorio 'The Messiah', 1937 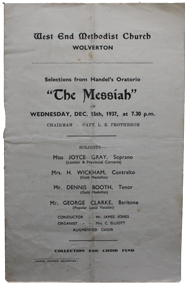 ‘Making your own entertainment’ was an important feature of life in Wolverton before the advent of television. The Wolverton Light Orchestra, St George’s Players, Wolverton Gilbert and Sullivan Society, all put on good quality productions to entertain local people. Choral singing based at local churches was another popular crowd-puller. The main choir in Wolverton was the large, all-male, men and boys’ choir of St George’s Church of which Frank Brown was a member.

The West End Methodists also had a choir and for an event like ‘The Messiah’ (although it’s not stated anywhere in this programme) they almost certainly invited other town choirs to boost their numbers for this large-scale choral piece.