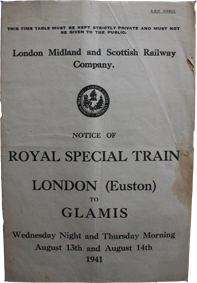 When the Royal Train was used all those associated directly or indirectly with ensuring it completed its journey satisfactorily were issued with detailed printed timetable instructions. These instructions, as the front cover of this document states ’… must be kept strictly private and must not be given to the public’. The fact that the journey was being made by the then Queen Elizabeth (mother to our present Queen) in wartime to her ancestral home of Glamis in Scotland made security all the more important.

The timetable belonged to Frank Brown whose uncle, Jack Wildman, was Royal Train Dining Manager and got his nephew a post as Steward. Mr Wildman spent 40 years as a waiter on the Royal Train, his first association with royalty being in 1900 when he travelled on the Royal Train with Queen Victoria on her last journey to Balmoral before she died.

On the back of the timetable there is a pencil written note, obviously written by Steward Frank Brown reminding him of his waiting duties the next morning: