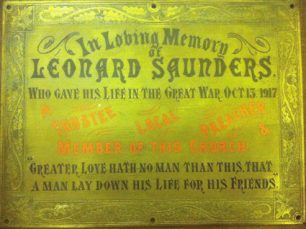 This plaque celebrates the memory of Leonard Saunders who was killed in the First World War and was a trustee, preacher, member and indeed one of the founders of the West End Church . His daughter Greta wrote her autobiography, Buckinghamshire Born, that was published by the People’s Press of Milton Keynes in 1980. In it she describes her father’s relationship with the founding of the church:

There was a Wesleyan Methodist Church and a Congregational, Enough you might say, for the spiritual needs of so small a town — oh yes, and a Salvation Army group. But my father thought otherwise. So here is my father, a young man in his early twenties, determined to found a Primitive Methodist Society in his new home town….

Before we three children were born in 1909 and 1913, Daddy was hard at work gathering round him a small group of fellow “Prims” as they were called, holding prayer and devotional meetings in their houses and working with all their might to beg, borrow and earn enough money to build a Primitive Methodist Chapel in Wolverton. They let nothing deter them, and within three or four years the land was bought, at the bottom of our own [Anson] road, the foundations laid, and the opening ceremony performed.

It is typical of my father that, although he had been the mainspring behind the building of the church, while we are confronted in the photograph by ladies in large floral hats and voluminous dresses, and men wearing their traditional top hats or bowlers, all that can be seen of him is the bottom half of a pair of legs encased in black boots dangling from somewhere high up in the scaffolding!