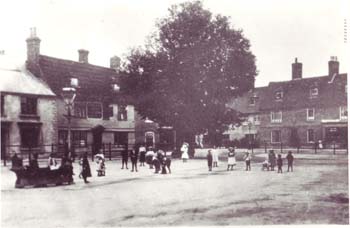 Stony Stratford has a long and interesting history owing to its position at the crossing point of the River Ouse. It became a coaching stop between London and the North.  In 1194 it was granted the status of “market” by Richard I. Many records of Royal visits include King John in 1215AD; King Edward IV and one of the princes in the Tower; King Henry VIII in 1525AD, 1525AD and 1531 AD. King Charles II granted Stony Stratford Market Square four annual Fairs in 1162AD. 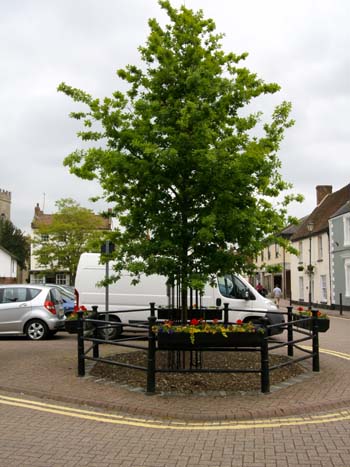 The Wesley Tree was situated in the market square.  It was a magnificent elm and it has been recorded that John Wesley, the Founder of the Methodist Church, preached beneath the tree on 30/7/1777 and on several other occasions. He addressed the crowds, declaring the town was “Stony by nature and Stony by name”. This majestic tree grew to a girth of seven and a half meters and lived between 200 and 300 years.

During the last century, the tree was subjected to attacks of vandalism and arson. This resulted in the tree becoming a charred hollow.  When the tree caught Dutch elm disease in 2007, it had to be removed. A new oak tree was planted on the same spot in 2008 – the plaque was unveiled by the Vice President of the Methodist Conference.

For decades, the square has been used as a place to park cars. I wonder if people, as they hurried along, even gave a glimpse towards this historic, long-standing tree when it was alive. 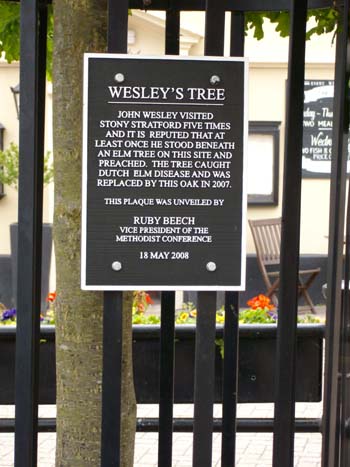