I was a chartered Quantity Surveyor with the Ministry of Public Building and Works working in London. I didn’t like commuting and there appeared to be little chances of further overseas postings or a posting to one of the regional offices or works areas. I decided I needed a change.

I applied for and got a job with the Milton Keynes Development Corporation (MKDC).  In December 197I arrived at the headquarters which was based at Wavendon Tower, just outside the designated area.

The white tower near the centre of the photo is  part of the original building.  The red buildings are the offices to house the MKDC.  The square white building was the first Advanced Factory Unit (AFU) and later also used as offices where I worked for a year or so.  All the furnishings were yellow as was the carpet.  It was generally known as the Yellow Box.

My first office was in a Terrapin Huts on what became a car park.  I joined a team which was preparing Bills of Quantities for one of the first housing estates Galley Hill near Stony Stratford.

I was soon introduced to Yardstick.  This was a system of controlling the cost of new build housing by local authorities and development corporations.  It main idea at that time was to encourage the building of high density, highrise schemes.  This was completely contrary to the ideals of the Milton Keynes master plan which was broadly based on the Garden City New Towns with plenty of green space and  ‘No building higher the tallest tree’.  Needless to say when the tenders came in they were well above the calculated Yardstick.  After some modifications the scheme was accepted by the Department of the Environment but with the proviso future schemes must be kept within it.

About this time the decision was made to reorganize the Quantity Surveyors with two main streams Cost Planners and Contract work.

Cost Planners work with the Design Teams which comprises architects (Building and landscape) , engineers (Civil, structural and services) and in the MKDC Estate Surveyors.  The design team was given a site and a brief which was a detailed brief of what was required to be built within a set budget which in the case of rental housing was calculated from the Yardstick.  The Cost Planning QS prepared a Cost Plan and estimates as the design work progressed in an attempt to keep within the budget.

The Contract work started after the drawings were prepared and involved taking off the detailed quantities of materials and workmanship for the preparation of Bills of Quantities (BQ) which were sent out to Contractors for the preparation of tenders.  When the tenders were opened the BQ were checked for arithmetical accuracy and if within the budget and approved by EMC and the Board, the contact let. During the building the QS agreed payments on account as the work progressed, measured and valued changes to the design or details and eventually agreed the Final Account. 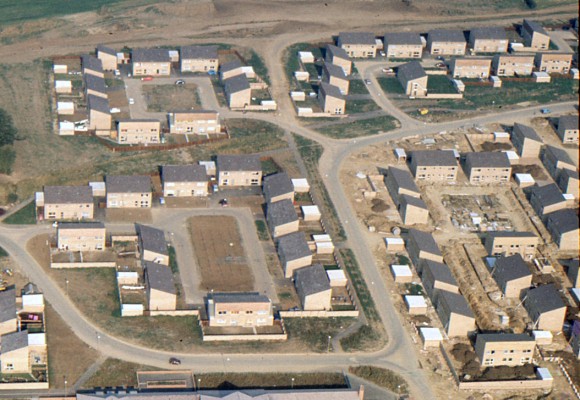 I only joined the Galley Hill team near the end of the Design Period but it is interesting to note that the Mono-pitch roofs were probably introduced to save on rainwater drainage costs with eaves, gutters, trenches, drains and manholes only necessary on one side of the housing.

The Contractor who was awarded the contract was Mowlems.  The houses were built using their system of a cast insitu concrete using specially constructed formwork boxes.  One for each of the main rooms and a one which formed the external wall.   Window and door openings were blocked out and concrete pumped in.  When the concrete set the formwork was removed and reassembled for the next similar house.  The floor joists positioned and another set of formwork boxes hoisted into position for the first floor and the process repeated.

The contractor built a traditional brick external wall with a cavity on the outside of the cast concrete wall, erected the roof structure and made the buildings weathertight.  Windows and doors were fitted heating, water, plumbing, heating systems installed as well as kitchens.  Small blemishes on the fair faced concrete wall were filled and wallpapered.